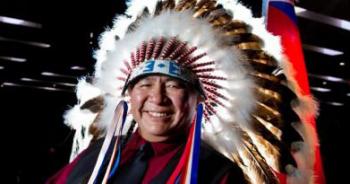 “When we’re talking about the 10-year fiscal arrangement the federal government is trying to roll out… they’re using a number which is far below what the actual figure is… then you show the province rolls out different numbers from, it sounds like, the same source. Who’s lying here?” — Tsuut’ina Nation Chief Lee Crowchild
By Shari Narine
Windspeaker.com Contributor

Tsuut’ina Nation Chief Lee Crowchild wants to do better by his people on the southern Alberta First Nation, and doing better means having the right figures.

Now, a new census figure provided by the Alberta First Nations Information Governance Centre, at Crowchild’s request, is one more tool in the box.

At a recent Assembly of Treaty Chiefs health forum in Edmonton, Bonnie Healy, executive director with the centre, told chiefs that her calculations reveal that the “actual number” of registered or Treaty First Nations people in Alberta is 165,156, not the 89,000 the Indian Registry reports.

Healy said she “clean(ed) up the data” using information from the province.

“So the true number, and the migration pattern in between provinces is really high. Roughly about 30,000 First Nations either married into a family in Alberta, but they’re like third generation Albertan, but they come from other nations in other provinces,” she said.

The Indian Registry figures had 10 per cent of the population at 106 years old and almost half the children were not counted, said Healy.

Healy’s census data, which does not include non-Status Indians, is 76,000 over the population figure the federal government is using to calculate Early Childhood Regional funding.

Indigenous Services Canada has calculated $11.2 million in funding over two years for Early Childhood Regional allocations for Alberta based on a Merger Funding Formula that uses a population figure of 89,000.

And that figure is different than the one offered by Alberta Indigenous Relations in a June 20 news release in celebration of National Indigenous Peoples Day. The province stated that “Alberta is home to 258,000 Indigenous Peoples” and broke that figure down to approximately 114,000 Metis and 2,500 Inuit, 111,990 registered or Treaty Indians and 24,595 non-Status Indians. The remainder of the number is comprised of “multiple Aboriginal identities” and “Aboriginal identities not included elsewhere.” Those figures are taken from the 2016 Canada census, said Alberta Indigenous Relations spokesperson Ted Bauer.

“If the federal government is using the same census, how come there’s such a big discrepancy?” asked Crowchild.

That discrepancy “absolutely” impacts the quality of life for First Nations, said Healy.

Crowchild said it is unclear how chiefs will be moving forward with the new population figure as there was no time at the recent AOTC meeting to discuss further steps. However, he was clear that any action taken had to be by more than his Nation.

“I’m only one chief. This has to be something that collectively we can argue, but not just one chief. Nothing will happen,” he said.

What’s important, he added, is that chiefs now have information they can work with.

On the top of Crowchild’s priority list is the 10-year grant funding Ottawa has committed to for First Nations.

“When we’re talking about the 10-year fiscal arrangement the federal government is trying to roll out, which is in essence trying to domesticate our treaties, our international treaties, that they’re using a number which is far below what the actual figure is. What they’re rolling out is conditional on existing figures they have. But then you show the province rolls out different numbers from, it sounds like, the same source. Who’s lying here?” he said.

To qualify for the new 10-year grant funding First Nations have to meet financial performance criteria established by Indigenous Services Canada with input from the Assembly of First Nations and the First Nations Financial Management Board.

Crowchild said that he had been working with Healy for the past seven months examining what the 10-year fiscal agreement means. Her census numbers have been part of that work.

“It’s about informing the other chiefs that we have a real chance to move towards a treaty-based funding arrangement but in order to do that we can’t just pull numbers out of the air. We have to have the real data so we’re fulfilling the needs of what’s our money already anyways.”

Crowchild said he hasn’t asked for an updated population or citizenship figure for Tsuut’ina.

According to the 2016 Statistics Canada census, Tsuut’ina First Nation is home to 1,645 people with 550 registered or Treaty Indians and 1,095 non-Status Indians.

Healy said both the federal and provincial governments are aware of the new Alberta numbers for Treaty and registered First Nation as they partnered with Alberta First Nations Information Governance Centre on the project.