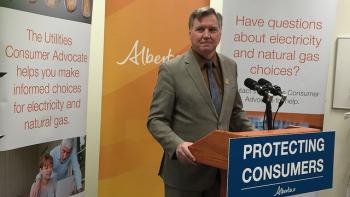 "We fundamentally believe every Albertans deserves to be warm and safe in the winter.” ~ Alberta Indigenous Relations Minister Richard Feehan

The Utilities Consumer Advocate (UCA) has hired a new consumer outreach and education staff member to ensure that Indigenous people do not spend the winter months without power or heat.

Indigenous Relations Minister Richard Feehan said the UCA, which is part of Service Alberta, will work across jurisdictions to ensure that those living on reserves, which fall under federal jurisdiction, are taken care of.

This program is available on reserve or off-reserve, said Feehan.

Last year’s numbers indicated that those living on First Nations and in Métis settlements were twice as likely to face disconnection from heat and power.

The additional UCA position was added in August as part of the two-year Alberta Indigenous Intern Program. Funding for the program is covered by the province with the intern working for an Indigenous organization for nine months.

“It is important that our government reaches out to Indigenous communities to ensure nobody falls through the cracks,” said Feehan.

Chris Hunt, executive director of UCA, said the intern will work with First Nations organizations, such as friendship centres and treaty organizations, as well as band offices, to determine who has been disconnected.

Taking the lead from those organizations, the intern will then work with community members to “connect them with the appropriate services.”

Albertans cannot be disconnected from power or heat during the winter months.

Under current regulations, utility retailers cannot shut off natural gas between Nov. 1 and April 14 and any time of the year when the overnight temperature is forecast to drop below zero degrees in the following 24-hour period for natural gas; and electricity between Oct. 15 to April 15.

However, problems arise when that disconnection takes place prior to winter. The UCA mediation officers with work with these people to help them negotiate a reasonable payment plan with the energy company, as well as connect them to social agencies or government programs to allow them to get their heat and power turned back on and kept on.

“It’s (a) vital (program) because we fundamentally believe every Albertans deserves to be warm and safe in the winter,” said Feehan.