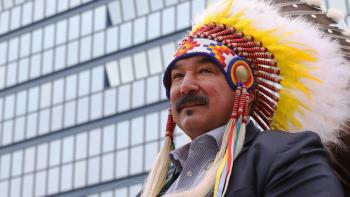 “I absolutely believe there was political posturing going on before. But I think this (federal) government is listening.” — Bob Maresty of the Indigenous Resource Network
By Sam Laskaris
Local Journalism Initiative Reporter
Windspeaker.com

Bob Merasty believes it is time for change.

Merasty is the executive director of the Indigenous Resource Network, which launched its Ownership Changes Everything campaign this past week.

The Indigenous Resource Network was launched in May 2020. The network provides a platform for Indigenous workers, leaders and business owners who support Indigenous engagement in the resource sector.

The network’s Ownership Changes Everything campaign, released last Tuesday, includes a two-minute video. The video can be seen here: https://www.youtube.com/watch?v=t6sfJBH-pUA

Merasty said many Indigenous communities currently face difficulties accessing capital to invest in projects and have equity in them.

“We’ve done our homework and we’ve done our intelligence that says we have to change the narrative,” Merasty said.

“Most Indigenous people are not against resource development,” it said. “We’re against being left behind.”
Now that the Ownership Changes Everything campaign has been launched, Merasty said members of the public can get involved by lobbying appropriate provincial and federal ministers to make changes.

“Too many of our communities still can’t access capital to get big projects built,” the video said.

“The Indian Act means houses, land and other assets can’t be used to access loans like other Canadians do.”

He believes Indigenous people have to take the lead, but Merasty says federal politicians are starting to realize changes are necessary, as well.

“I absolutely believe there was political posturing going on before,” he told Windspeaker.com. “But I think this (federal) government is listening. The current government is prepared to work with our Indigenous peoples.”

The Ownership Changes Everything campaign does not just advocate for change. It also provides possible solutions.

For example, the campaign calls for the implementation of an Indigenous Infrastructure Bank to help kickstart capital.

“There are real tangible solutions,” said Merasty, the former chief of Flying Dust First Nation in Saskatchewan from 2012 to 2014.

“(It) is a step the federal government can take that will help First Nations get the capital needed to become partners and owners of the projects on our own lands,” Merasty said.

The campaign calls for the national guaranteed loan program to be governed by the following principles:

“What we need to do is address the poverty in many of these communities,” he said, adding he believes campaign suggestions can improve lives with the implementation of changes that are being presented.

And the sooner the better.

Merasty believes it only makes sense to have a national Indigenous guaranteed loan program.

“Our communities are faced with a choice between poverty or development,” he said. “Indigenous ownership in major projects is a win-win for industry, Indigenous people and Canadians. A national guaranteed loan program is a no-brainer to move that forward.”

Merasty points to Coastal GasLink, a pipeline project that will transport natural gas to tide water through British Columbia, as a successful venture, including Indigenous participation. A total of 16 communities signed on to the deal.

“We want to showcase how success is possible without barriers.”

After he was the chief of his own First Nation, Merasty was the second vice-chief for the Federation of Sovereign Indigenous Nations, representing 74 First Nations in Saskatchewan from 2015 to 2017.