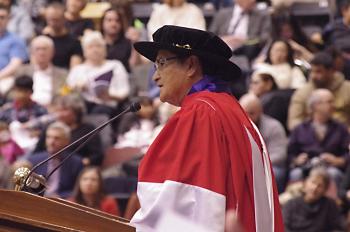 Canada “has the potential to become a great civilization.” — Ovide Mercredi
By Marjorie Roden

Ovide Mercredi, the former national chief of the Assembly of First Nations, said Canada has no right to feel smug about the last 151 years.

Canada, he said, needs to find its peace and needs repair.

“Canada is a young country… There is a great need and a lot of room for reconciliation,” he told graduates at the University of Manitoba’s 51st annual fall convocation Oct. 17. An honorary doctor of Laws degree was bestowed on Mercredi that day.

He said Canada had “the potential to become a great civilization. People from all over the world come to this country.”

“Perhaps this change can be your change and one of the common goals we can all share for the future. The best hope for change is through personal relationships,” he told the grads.

Mecredi grew up off reserve because his mother lost her Indian status when she married a Metis man.

“I was raised to speak my Cree language by my lovely parents, George and Louise Mercredi, and defined my belonging to my Indigenous Nation, the Cree Nation,” Mercredi said.

“At that time, my community was isolated by mainstream Manitoba and Canada. I was raised and educated in the Cree world.”

Lessons from this Cree world included “to be kind, to work hard, and to seek harmony.”

He first faced discrimination in public school when he was told not to speak Cree.

“I still cannot understand what this prohibition of my language had to do with education,” he said.

“Being non-judgmental is another human value I learned as a Cree child,” said Mercredi. “Individuals have the right to be different.” Another human idea of Indigenous nations is non-interference on human relations, he said. “This is our idea in nation-to-nation relationships that Canada has still to learn.”

He said the common experience “is our human need to belong. That may well be the greatest human right we share, the right to belong. Once our identities are established, we then have our intention to find our purpose in life. At some point, in our first way down our road, we begin to pay attention to what is beyond our own personal goals and lives. In my case, it is the optimistic concern for the future of my people, and all First Nations within Canada. Perhaps for many, the concern is for the future of democracies like Canada.”

“We all belong in the same human race. That’s one world. That is what ‘All of My Relations’ means.”

The words struck a chord with Mehmet Kokturk, a Turkish student who graduated with his Advanced Bachelor of Arts, said,

“His words were really strong, and they really made me think.”