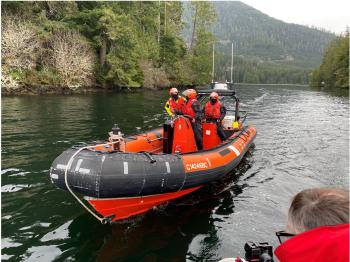 “The ocean is the boss and that’s a critical thing for people to understand. You know to be careful and it’s something you learn in time or you’re taught.” —‘Namgis First Nation Chief Don Svanvik
By Crystal St.Pierre
Local Journalism Initiative Reporter
Windspeaker.com

Four communities along the western shores of British Columbia that are members of the Coastal Nations Coast Guard Auxiliary will be showcased in an upcoming television series called Ocean Warriors – Mission Ready.

“We are going to watch those guys transition into a full-fledged volunteer Indigenous coast guard,” said Steve Sxwithul’txw, creator, producer and director of the upcoming series.

“In the past they haven’t gotten the recognition that they deserve as, I’ll be honest, as heroes. These are people that put their lives at risk every day. First Nation people from small communities who go rushing out in the most atrocious weather — high winds, rain, high surf, fog, you name it. And when a call for a rescue comes in or assistance, they always are there.”

Filming for the series is taking place during the month of May in Ahousaht, Quatsino, ‘Namgis, and Heiltsuk First Nations and will air in 2023 on APTN and CHEK TV.

“Ocean Warriors is a creative concept that I came up with,” said Sxwithul’txw. “It was a chance for us to shine the light on a group of young mariners that are just, or have, formed over the last couple of years on B.C.’s west coast.”

The 13 half-hour episodes will follow 10 members from each community as they develop their search and rescue skills through various training classes on the water, as well as attend emergency calls.

Sxwithul’txw said the show will also dive deeper into the culture and heritage of each community through interviews with individuals who will tell stories about critical situations where the community was there to help.

From overturned planes to overturned tour boats, for years the people from these communities were there to help, said ‘Namgis First Nation Chief Don Svanvik.

“I think what sort of got this going were those instances where there was First Nations communities that were first on the scene,” he said.

In 2016, the federal government announced it would provide funding to formally create auxiliaries where individuals would be trained and have the proper gear available to them for these high-risk situations.

These auxiliaries have been forming since the initial funding was announced, said Conrad Cowan, executive director of the Coastal Nations Coast Guard Auxiliary.

“It takes time to build these teams, to build the infrastructure within the community,” he said.

From each community, a person is assigned to the auxiliaries’ board and will provide Cowan with names of members interested in becoming part of the team.

“It’s a very organic, very community-based way of doing it,” he said.

Those who are chosen to be members of the auxiliaries attend a nine-day training session located at Bamfield on Vancouver Island, B.C.

In addition to the training provided, the communities have received grants to have custom-built search and rescue vessels made.

Svanvik said ‘Namgis First Nation has just recently joined and believes it will be a positive contribution to his community and their ability to help others.

“There are times when something happens (that) people aren’t calling the coast guard. They are calling someone at home,” he said. “On the ocean, there’s a simple law. You help somebody that’s in trouble. When there’s somebody in trouble nearby, people will go and help.”

But, as Svanvik pointed out, the ocean can be a very dangerous place for those who don’t have the knowledge and experience that members of these communities do from years of living there.

“The ocean is the boss and that’s a critical thing for people to understand,” he said. “You know to be careful and it’s something you learn in time or you’re taught.”

Many members of these communities were once a part of the commercial salmon fisheries “when the fishing was good,” he explained.

Cowan said Ocean Warriors — Mission Ready will highlight the skills these communities have developed and the importance of the funding they were provided.

“It’s going to give a good light on what we do and the good people that are saving lives at sea up and down the coast from First Nation communities,” he said.