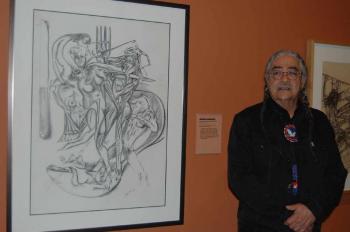 The authenticity of another Norval Morrisseau painting has been verified by a court, and that can’t be taken lightly, but fellow Indian Group of Seven artist Joseph Sanchez can't help but see some funny in the situation.

“I see Norval as really yucking it up pretty good on the other side, that people are copying his paintings, who are making money. There’s lawsuits. His name has been in the press ever since. In that way he’s achieved notoriety,” said Sanchez chuckling.

Last week, an Ontario judge ruled that the painting Spirit Energy of Mother Earth “has not been proved to be a forged or fake Morrisseau. From the law's point of view, it is therefore a real Norval Morrisseau painting." Kevin Hearn, owner of the Morrisseau, had challenged its authenticity.

Because they were both members of the Indian Group of Seven, Sanchez has often been asked to comment on the topic of forged Morrisseaus. And it isn’t all fun.

“It’s certainly messed up the market. It’s created a real imbalance and questions of whether or not you have a Morrisseau. Morrisseau left paintings everywhere,” he said.

“I just think, I’d like to see it kind of come to an end,” Sanchez said.

Ontario art collector Richard Hall couldn’t agree more. Hall is both a long-time collector of Morrisseaus and the works by other First Nations’ artists and he knew the late Joe McLeod. Hearn had purchased Spirit Energy of Mother Earth from McLeod’s gallery.

Hall says his concerns with Hearn’s claims, and his pleasure with the court’s findings, go beyond his relationship with McLeod.

“I think this needs to be cleared up because Norval and others like him have a great place in the history of Canada. Their artwork is fantastic. I think Norval, more so, is the greatest ever Canadian painter. It’s important that we get this issue gone,” said Hall.

It’s the third time a Morrisseau painting has been challenged in court as a forgery. In 2011, in Otvanik v. Sinclair, the court preferred the evidence of the expert who claimed Jesuit Priest Bringing Word was a forgery. In 2013, the court found that the Wheel of Life, purchased by Margaret Hatfield was "on the balance of probabilities … an original Norval Morrisseau.”

Hall says there are fake Morrisseaus out there, saying he recently saw two paintings online up for auction which “purported to be Morrisseaus, but they didn’t look like anything he would have painted.”

Sanchez also claims to have seen an “obviously” fake Morrisseau when he was in Canada this past April.

“It’s still out there. There’s a lot out there,” said Sanchez.

During the latest trial, the court acknowledged in its ruling the existence of a Thunder Bay-area fraud ring which “focused on imitating Norval Morrissau’s style of painting,” reads the decision.

“He could do many, many paintings in one day. No matter what his condition, he always painted,” said Sanchez, who hosted Morrisseau at his farm in Manitoba. Sanchez now lives in Santa Fe, New Mexico.

He recalls Morrisseau as “a man of unique energy. A master artist, for one thing, and a visionary.”  And that energy continues, even after Morrisseau’s passing in 2007.

“All I can be is thankful that he’s keeping me, the Group of Seven, still in the headlights. People are still talking,” said Sanchez.