No room for racism in the workplace, says heavy equipment operator 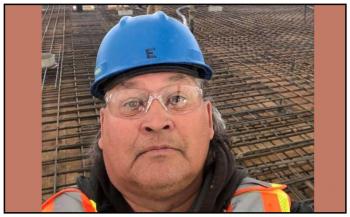 Douglas Sinclair was insulted by a racist comment from a supervisor who worked for a large company operating in Indigenous communities across Northern Manitoba and Ontario. Cultural safety training should be proactive training, not used as a punishment, Sinclair says. Photo provided by Doug Sinclair.

“I hope that the next generation of Aboriginal employees never have to hear or put up with racism in the workforce.” — Douglas Sinclair
By Odette Auger
Local Journalism Initiative Reporter
Windspeaker.com

Sandy Lake First Nation is a remote and isolated community located approximately 374 km north of Kenora, Ont. It’s on the northwest end of Sandy Lake along the Manitoba border and accessible by plane or a 145 km ice road from North Spirit Lake, a road that is only passable during winter road season.

It’s a dry community, and visitors arriving at the airport or on the winter road undergo a luggage check for alcohol and/or illegal substances.

The community care and attention to these protections and protocols take time and effort.

But what about other harms that can enter the community? For example, contractors coming in to work on capital projects. Do they bring bias, stereotypes and racist behaviour? These are questions worker Douglas Sinclair wonders about.

“Do they have any training before they come to work in our Indigenous communities?” asks Sinclair.

He is a heavy equipment operator and has worked for Arnason Industries casually for 15 years. Sinclair was working for Arnason at a job site for Sandy Lake First Nation in March and April.

Arnason Industries is a Winnipeg-based company that has many contracts across northern communities in Manitoba and Ontario, the majority in Indigenous communities. One of their projects is a new water treatment plant that will tie into the existing one at Sandy Lake.

Sinclair is from Fisher River Cree Nation. He was walking past his supervisor and a group of three men when his supervisor called out a racist comment.

Sinclair paused, and asked what he had said. The supervisor repeated it, as the other men laughed.

At 57, Sinclair has a balanced, calm demeanour. He didn’t react impulsively or angrily, but the comment weighed on him.

He knew he had to speak up.

He confronted the supervisor.

“I told him I was offended by his remarks he made to me about rain dances in front of other non-Aboriginal people and laughing about it,” Sinclair said.

He did receive an apology from the supervisor, which Sinclair accepted, saying “I can forgive the words you said, but I will never forget them.”

A couple hours later, he went to Arnason’s worksafe coordinator and asked what is done about racism in the workplace.

The safety coordinator took his statement and filed a complaint. The three men who laughed at the racist joke later shared their statements as witnesses.

One came and apologized to Sinclair afterward, and another bystander similarly apologized.

“They said it was eye-opening, and they hadn’t thought about it being hurtful,” Sinclair said.

It has crossed his mind if someone else had this experience, would they have reacted physically? The risk is something project managers need to plan for, thinks Sinclair. Or even better, proactively train employees so the racism doesn’t occur in the first place.

“Just knowing that this man did it before, and now he did it again. No. This has to stop because he can't keep going from reserve to reserve, thinking like that about Aboriginal people,” said Sinclair.

It is not easy for people to speak out, said Sinclair. When he was younger, he said he probably wouldn’t have had the courage.

It does take strength to speak up, especially in this context. The reality of working in camps far from home, staying in bunkhouses and, in Sinclair’s case, being only one of three Indigenous staff on a worksite.

Windspeaker.com reached out to Arnason Industries to ask what type of anti-racism training employees have before the company takes contracts with Indigenous communities.

Barry Arnason is the owner-operator of the family-owned company. The family has been in business for 47 years. When Arnason was in university, he focused on cross-cultural communications and history.

Arnason has a personal interest in ensuring good relations are kept. He says he sets this expectation for his company and employees.

“I've always had a great deal of respect for the First Nations culture, the traditional culture. I have not only made a living through all of this, but enjoyed it and continue to study the whole realm of the relationship between outsiders, such as myself, and the transition of the First Nations societies that we are guests of," said Arnason in a telephone interview.

It’s very important, Arnason said. He notes that 85 per cent of his 135 employees are Indigenous.

Sinclair said he has not known any Indigenous managers in the company. “Pretty much labour. [I have] never seen any Aboriginal supervisors, for that matter.”

First Nation capital projects are the foundation of the company’s business. The funding for projects are often shared between Indigenous Services Canada, with funding agreements made in partnership with First Nations, federal or provincial governments.

Arnason says when a complaint is filed, protocol would mean the project manager hands the complaint to the safety coordinator. They would conduct the investigation, and once completed, remedial action would be taken.

“If it was in the form of a supervisor making an inappropriate comment, they would go into sensitivity training. That is exactly what happened in this situation.”

When asked, Arnason says there is no formal cultural safety training program in place for staff or management. Instead, he says, he leads by example, and “we discuss it on a daily basis.”

In a video made when Sinclair confronted his supervisor about the racist remark, Sinclair mentions the lack of cultural safety training in any safety meetings.

“In the five weeks I’ve worked here, not once did I hear about racism in the workplace. Not once.”

He thinks this is important, and it would proactively address anti-Indigenous racism in the workplace.

During an interview with Windspeaker.com, Arnason agrees it would be a good idea to bring training into work safety committees. He says training partners have suggested this, and he believes it is increasingly part of the training in the industry at large.

Roland Linklater is a Sandy Lake member, and also a heavy equipment operator for Arnason’s at the job site.

He says he hasn’t heard any discussions of cultural safety, either. He has brought the video of Sinclair confronting the supervisor and this issue to a liaison for Sandy Lake council.

At the time Windspeaker.com spoke with Sinclair, the company had not apologized to Sinclair for the supervisor’s comment.

Sinclair says companies who are awarded projects should be required to incorporate cultural safety training and, specifically, anti-Indigenous racism training.

He hopes that “all supervisors are taught about culture awareness and all companies be held accountable for their supervisors and zero tolerance if something like racism happens.”

“The government should make sure all companies have the proper policy and people are educated on other cultures, before handing out the contracts to these companies,” he says.

“I hope that the next generation of Aboriginal employees never have to hear or put up with racism in the workforce.”

“I hope people are encouraged to take a stand against racism in the workplace, all over for that matter.”