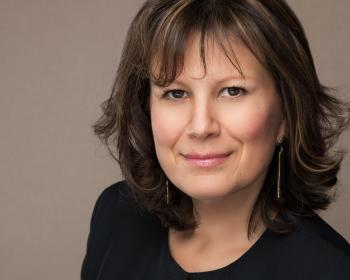 “Oil sands are definitely leading the way in terms of economic reconciliation and putting more emphasis on working with Indigenous business than most of the other sectors throughout Canada.” —Nicole Bourque-Bouchier, Indigenous Woman in Leadership award winner
By Shari Narine
Windspeaker.com Contributor

Nicole Bourque-Bouchier is this year’s recipient of the Indigenous Woman in Leadership award presented by the Canadian Council for Aboriginal Business.

Those selected for the award, said Lynda Keith, director of marketing at the CCAB, are “role models for young Indigenous women.”

A member of the Mikisew Cree Nation and now CEO of the Bouchier Group, Bourque-Bouchier recalls her early days in the oil and gas industry, being the youngest and only woman sitting at the board table. She’s helped grow the company she joined in 2004 from 10 employees to 850, many of whom are Indigenous.

The Bouchier Group is headquartered in Wood Buffalo, located in the thick of the oil sands.

“Oil sands are definitely leading the way in terms of economic reconciliation and putting more emphasis on working with Indigenous business than most of the other sectors throughout Canada.

Along with dedicating herself to her business, Bourque-Bouchier is also a dedicated mother and dedicated community supporter.

She has five children, ranging in age from eight years to 32 years old. A strong advocate for women, Bourque-Bouchier says she has been careful not to present the world in a female versus male scenario, especially to her two daughters. Instead, she lets all her children know that they are capable of achieving their dreams.

“It was the same thing shared with me as a child. It doesn’t matter who you are, where you come from, what’s your education level, you’re just as capable of being as great – whatever your definition of great is – as the next person. We should dream big and work to live our dreams,” she said.

Bourque-Bouchier labels herself as “self-taught” in her field, mentored and supported by her husband and her father.

Having been active in Wood Buffalo’s local business association, being recognized by a national organization like CCAB for her efforts is “really exciting,” said Bourque-Bouchier, and a welcomed way to shed positive light on the oft-maligned oil sands industry.

Bourque-Bouchier also appreciates that CCAB has made a concerted effort to recognize women in industry. She points out that women are often recognized for holding leadership roles in education and health, sectors in which women usually out-number men.

“Society is changing.  I think we’re seeing it very much on a global level where we have the #MeToo movement and women are really starting to stand up and openly talk about a lot of the discrimination we face in past years and how it’s not acceptable. We’re having more of a voice than we had before. We are seeing women move into key roles,” she said.

Bourque-Bouchier is proud to follow in the footsteps of her two predecessors, including inaugural winner Jody Wilson-Raybould. Last year’s award winner was Roberta Jamieson, a Canadian lawyer, First Nations activist and president/CEO of Indspire.

Bourque-Bouchier says she and other Indigenous women continue to see Wilson-Raybould as a role model. Wilson-Raybould is currently at the centre of a controversy in the Prime Minister’s Office.  She won the CCAB’s Indigenous Woman in Leadership award in 2017.  She was then an integral part of the Liberal government’s Cabinet, appointed by Prime Minister Justin Trudeau as the minister of Justice and Attorney General.

But the PMO is now accused of inappropriately trying to pressure Wilson-Raybould to intervene in the criminal prosecution of SNC-Lavalin when she was Attorney General. She has resigned from Cabinet altogether.

“I just think that her bold move to resign is something that a lot of Indigenous women in Canada have gotten behind, can get behind. I could relate in terms that you’re being put in a very interesting situation where you have to make a decision. And it’s just as easy to decide not to do anything, to keep your job and keep going.

“But it’s pretty bold to resign and it sends a statement,” said Bourque-Bouchier. “And I know, as an Indigenous woman, and I know most of the Indigenous women I know all speak about how they admire her for doing that.”

While the former Cabinet minister remained almost mute on the situation, based on client-solicitor privilege, others did not. Some of the comments levied against Wilson-Raybould by Ottawa insiders were called “sexist and racist” by Indigenous leaders.

“There is always ongoing levels of discrimination for being Aboriginal. You see it in all facets, whether it be politics or business. We’re all faced with it,” said Bourque-Bouchier.

“I think as women, though, especially in non-traditional areas like politics or the oil sands, unfortunately we’re at a time where we do have to prove ourselves in order to gain that respect,” she said.

“There’s still more work to be done. It’s becoming more and more common in all areas to see Indigenous women step into these roles, but it’s not the majority by any means …. We are slowly making those strides and I think one day maybe this award won’t exist because we would have gotten there. It’s going to be just as acceptable to have a female Indigenous leader as it would to have a male,” said Bourque-Bouchier.

Bourque-Bouchier will receive the 2019 Indigenous Women in Leadership award on April 16 at the Design Exchange in Toronto.