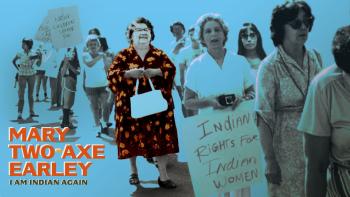 This June, nfb.ca will stream free of charge more films than ever as the National Film Board of Canada celebrates National Indigenous History Month, Pride Month and World Oceans Day.

Starting June 13 and new for National Indigenous History Month is the film Kímmapiiyipitssini: The Meaning of Empathy, directed by Elle-Máijá Tailfeathers.

Tailfeathers is a member of the Kainai First Nation (Alberta) and the Sámi in Norway. Kímmapiiyipitssini (GEE-maa-bee-bit-sin) is a film about the impacts of substance use and the overdose epidemic in a Blackfoot community within the context of the lived trauma of settler colonialism.

Kímmapiiyipitssini: The Meaning of Empathy is the winner of nine awards, including the Emerging Canadian Filmmaker Award and Rogers Audience Award for Canadian Feature Documentary at Hot Docs.

Kímmapiiyipitssini means “giving kindness to each other.”

Starting on June 21 is the film Mary Two-Axe Earley: I Am Indian Again, directed by Courtney Montour. It shares the powerful story of a First Nations woman who fought for more than two decades to challenge sex discrimination embedded in Canada’s Indian Act. Two-Axe Early became a key figure in Canada’s women’s rights movement.

The film uses never-before-seen archival footage and audio recordings, as Mohawk filmmaker Montour engages in a deeply personal conversation with the late Kahnawà:ke woman who galvanized a movement to restore Indian status to thousands of First Nations women and children.

The film is the winner of three awards, including Best Documentary Short at imagineNATIVE.

There are also more than 500 titles on the Indigenous Cinema channel, including a growing number of works in Indigenous languages.

New for Pride Month starting June 6 is the film Someone Like Me, directed by Sean Horlor and Steve J. Adams. The film follows the parallel journeys of Drake, a gay asylum seeker from Uganda, and a group of strangers from Vancouver’s queer community who are tasked with supporting his resettlement in Canada. Together, they embark on a year-long quest for personal freedom, revealing how in a world where one must constantly fight for the right to exist, survival itself becomes a victory.

And new for World Oceans Day starting June 8 is Ocean School, a free, innovative ocean education resource for use in the classroom and at home. Ocean School’s mission is to help everyone understand our influence on the ocean and the ocean’s influence on us, and to empower people with knowledge, tools and inspiration so that they can take action.