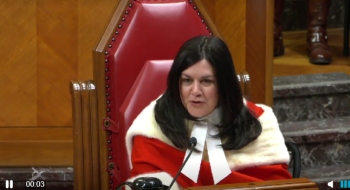 “We look to the Supreme Court of Canada to uphold values and principles that we consider fundamental in our lives: fairness, integrity, compassion, balance…Justice O’Bonsawin possesses the skills needed to serve the court in this time of transformation.” — Doug Downey, minister of justice and the attorney general of Ontario
By Shari Narine
Local Journalism Initiative Reporter
Windspeaker.com

As Michelle O’Bonsawin was officially welcomed Monday morning as the new justice on the Supreme Court of Canada, she was told that much rested on her shoulders as the first Indigenous person to hold such a position.

But O’Bonsawin, whose name in Abenaki means “pathfinder,” was clear that she in turn had “stood on the shoulders of giants,” naming among them prominent Indigenous leaders Murray Sinclair, Harry Laforme and Phil Fontaine. Sinclair, a former lawyer, served as chair of the Truth and Reconciliation Commission on the legacy of Indian residential schools and as a Canadian senator. Laforme is an Ontario Court of Appeal Justice. Fontaine served multiple terms as national chief of the Assembly of First Nations.

“Through determination, and also with the support of a dynamic group, I reached my goal of being a judge at the Supreme Court of Canada,” said O’Bonsawin. She is of the Odanak First Nation. “My journey to this court has not been an easy one, but it has been meaningful and rewarding.”

It is that journey that convinced federal and provincial officials, as well as members of various legal organizations, that O’Bonsawin was the right person for Canada’s highest court.

They said her vast experience and expertise in the areas of mental health, Gladue principles, human rights, labour, and privacy laws would serve the court well.

As a woman, an Indigenous person, someone fluent in English and French and learning her Indigenous Abenaki language, a scholar, an author and a mother, they said all these positions were relevant and important in providing lived experience.

O’Bonsawin was told that her work going forward would shape Canadian law in ways the legal institution has never been touched before.

They were all clear that it was time for this historic appointment of an Indigenous person to the court.

“Diversity matters. The work of this court, in general, and the administration of justice, in general, is enhanced when we have justices who truly reflect the Canadian population,” said Jill Perry, president of the Federation of Law Societies of Canada. “We need people on this bench who can bring with them the broad range of Canadian backgrounds and experiences when ruling on matters of national concern.”

That diversity, said Steve Bujold, president of the Canadian Bar Association, must also be recognized through embracing Indigenous legal traditions and systems that stood before colonization imposed western legal systems.

Speaking directly to O’Bonsawin, Bujold said, “As a justice of the Supreme Court of Canada, I am confident that you will play a vital role in reviving Indigenous legal traditions that have been sidelined by centuries of colonization in Canada. Government and our courts still have plenty of work ahead in weaving Indigenous tradition into the fabric of Canadian law and we must everyday recommit ourselves to that work.”

“(O’Bonsawin) will help guide the evolution of Canada’s laws with a deep commitment to fairness, inclusion and the rule of law,” said Gary Anandasangaree, parliamentary secretary for Canada’s attorney general and Justice minister David Lametti.

Doug Downey, minister of justice and the attorney general of Ontario, said the decisions made by the Supreme Court impacted the lives of every Canadian.

“We look to the Supreme Court of Canada to uphold values and principles that we consider fundamental in our lives: fairness, integrity, compassion, balance…Justice O’Bonsawin possesses the skills needed to serve the court in this time of transformation,” said Downey.

Peter Kryworuk, president of The Advocates’ Society, noted that O’Bonsawin had many firsts on her resume. In her new position she would be furthering the work of advocates as she “shape(s) the narrative before the court, to demonstrate command of the case and to outline a path for the court to follow.”

Jacqueline Horvat, treasurer of the Law Society of Ontario, said that as the first Indigenous person on the court O’Bonsawin would be held to a “different and more challenging standard” than those who served before her.

Horvat was clear, however, that delivering judicial transformation was not O’Bonsawin’s job alone.

“This responsibility does not rest solely on your shoulders alone. It is up to each of us to support and stand with you, to listen and learn to ensure that the diverse perspectives and rich stories of Indigenous peoples are woven into the fabric of our justice system and integrated into the cultures of our communities,” said Horvat.

The ceremony was presided over by Chief Justice of Canada Richard Wagner, P.C.

For 50 years, “the court has issued numerous decisions that have shed light on important Indigenous issues. And when the case will present itself, I have no doubt that Justice O’Bonsawin will make a valuable contribution to the court’s work on these issues,” said Wagner. “(The court) is constantly evolving to meet the changing needs of our modern society.”

O’Bonsawin was appointed to the Supreme Court of Canada on Sept. 1 by Prime Minister Justin Trudeau following the recommendation of an independent and non-partisan advisory board tasked with identifying suitable candidates.

O'Bonsawin filled the vacancy created by the retirement of Justice Michael J. Moldaver. As Moldaver was appointed to the Supreme Court from the Court of Appeal for Ontario, the process for his replacement was open to candidates from Ontario in keeping with the custom of regional representation.

O’Bonsawin has a distinguished career in the legal community spanning more than 20 years. She was appointed to the Ontario Superior Court of Justice in Ottawa in 2017.

The Supreme Court of Canada consists of nine justices. It sits in Ottawa and holds three sessions a year. Annually it hears on average between 65 and 80 appeals.