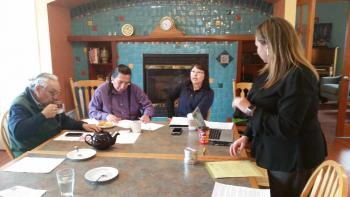 Monique Fry (foreground), who is serving as an advisor for NewScoop YYC, has been working on an Elder protocol project over the past year. (Photo: supplied)

A new alternative media platform in Calgary wants to share uplifting stories about Indigenous and non-Indigenous relations in the southern city.

And Monique Fry is applauding NewScoop YYC, not only for it initiative, but for the way it has gone about doing it.

“It’s a good example of a non-Indigenous organization trying to do it respectfully and in the right way truly. I think they’re very open to understanding what they don’t know and they’re being humble about it. And things I’ve learned from the Elders over the past year…if that cultural integrity and authenticity is there, you’re coming at it with humbleness without ego, it’s okay to ask questions. We’re all learning,” she said.

Fry, from the Cheam First Nation of the Sto:lo Tribal Nations in British Columbia, has been a cultural mediator, bridging the Indigenous and non-Indigenous communities, for more than a decade now.

The appeal for help, she says, is something she wouldn’t have received10 years ago as most non-Indigenous groups would have figured they understood Indigenous peoples.

“Now for sure we’re seeing more (awareness) because of the (Truth and Reconciliation Commission’s) Calls to Action, because of new governments and their responses to things, both locally and nationally, people want to do something,” said Fry.

Simone Lee is one of the founders of NewScoop, which got its start in 2013. The Internet media platform was formed to focus on positive news and looking “at what’s on the horizon.” NewScoop operates as a co-operative with a number of funding partners. The work of the TRC and a request by one of those funders influenced NewScoop to look at the Indigenous/non-Indigenous relations in Calgary.

To that end the Right Relations Story Circle was crafted, says Lee, and NewScoop sought help from Fry, who is a facilitator for funding for Indigenous programming with Calgary Learns, and Pam Beebe, with Vibrant Communities Calgary, a funding partner for NewScoop.

“We see (Indigenous/non-Indigenous relations) as an area where there are many, many things happening,” said Lee.

She points to decisions recently made by Calgary city council to rename Langevin Bridge as Reconciliation Bridge, as Langevin played a role in the creation of Indian residential schools. Calgary is now permanently flying the Treaty 7 flag at the city municipal complex. Those actions were the result of the White Goose Flying report, which outlined Calgary actions, based on the 94 Calls to Action from the TRC.

The first story circle is planned for April 6 at Fort Calgary in the learning centre, where student tours stop for a lecture on history.

“We thought that was sort of an auspicious place to hold it because that’s where we started becoming neighbours and also sort of to reclaim it as Indigenous land,” said Lee.

The plan is to hold story circles over the next six months with both Indigenous and non-Indigenous participants.

“We want to create conversations and we want to hear people talking about what they’ve actually seen themselves so we can follow-up on those stories,” said Lee.

“The premise of (NewScoop) is future-focused, what’s coming up and what’s possible…. We look for the assets that are there so we ask about what’s working. We’re aware of challenges, certainly, but that’s not really our focus,”

Fry says patience, inviting the “right people,” reaching out to the Indigenous community, and being intentional in what NewScoop wants to accomplish and what it wants from participants will lead to success.

“NewScoop’s philosophy is that you get more of what you look for, so we are actively looking for those stories so we can bring them out and show them to people and possibly generate more of the same positive actions, initiatives, relationships,” said Lee, who studied radio and television at Ryerson University, in Toronto.

NewScoop contributors are a combination of experienced journalists and those who like to write. They post two to four stories each week.

Fry is pleased that a non-Indigenous group is taking a lead in righting relationships.

“There’s many of us who work on the ground, who’ve been doing this work for a long time … without those allies around us and supporting us and also reaching out rather than us going out and trying to teach everybody,” said Fry.