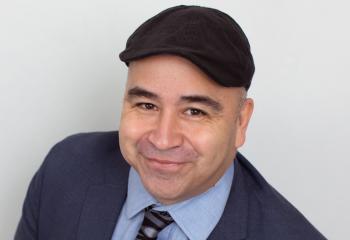 Herbie Barnes is just itching to bring back the magic of children’s theatre to downtown Toronto.

“The theatre hasn’t stopped developing plays... We just haven’t been able to have an audience,” Barnes told Windspeaker.com.

After a lengthy career in theatre that began in 1989 with Debajehmujig Theatre Group, Barnes will take over his role at YPT from Allen MacInnis, who has served as the theatre’s artistic director since 2002 and announced his retirement in March 2020.

Barnes made his first appearance in a YPT play in The Secret of Shhh in 1993, but admits he was unsure of his chances of landing the job of artistic director.

“I applied with hope but not thinking I would get it.”

Young People’s Theatre, located at 165 Front Street East in the St. Lawrence neighbourhood, was launched in 1966 and has been a staple of the Toronto arts community ever since.

“The search committee was very excited by Herbie’s intercultural, inter-generational programming ideas, both in show selection and educational activities,” said Executive Director Nancy Webster. “I personally am really looking forward to partnering with him for the next phase of our company’s development. I know Herbie’s positive leadership style will inspire YPT’s staff and board well into the future.”

The search committee was made up of 10 current and past YPT board members.

Few industries have felt the impact of the pandemic quite like the arts sector, but Barnes is looking forward to the shows that will be produced once the theatre is able to open up fully again.

“I’m gonna be handed these plays that have been workshopped and worked out; that are strong and tight and well developed,” he said.

One such play is Barnes’ own Bent Boy, which was shortlisted for the Sharon Enkin Plays for Young People Award in 2020.

Outside of developing work for a future live audience, the YPT looks very much like most other performing arts spaces these days, hosting online classes, camps, and workshops that usually would be taking place in-person.

“Technology has certainly changed the way we approach audiences and how we attract audiences. We have to be completely aware and more inclusive. Theatre has changed so much where inclusivity has opened everything up. That’s a major part of what theatre and film is trying to do.”

Barnes said he spent much of his early days in theatre in tour groups that would visit many Indigenous communities across Ontario and Canada.

“We toured all the small communities… I’ve been introduced to every nation right across the country. I feel like I’ve always had that connection [to my Indigenous roots]. My mother was a strong advocate and always taught us growing up, even though we were distant from it.”

Outside of youth theatre, Barnes also has numerous acting and directing credits, including The Rez, Murdoch Mysteries, Tipi Tales, Buffalo Tracks, Guilt Free Zone and Dance Me Outside.

Based in Toronto for most of his life, Barnes said it’s always been important to him to make sure that he’s representing different cultures and backgrounds respectfully and correctly.

“As I’ve been involved in theatre, I’ve been learning way more. I use a lot of experts, a lot of talk with Elders,” Barnes said. “Anytime you open up a script you have to do some research.”

Barnes also relishes the opportunity to educate the typically thousands of young children that visit the theatre each year.

“My role is to open the world,” Barnes said. “With children, they’re way more open to [learning new things]. They haven’t set their mind up yet. So they can be influenced to look around them and it’s important to educate, to empower, and to share.”

And even though YPT is primarily focused on showcasing plays for young children, Barnes encourages everybody to come check out a show when it’s safe.

“Use little cousins and nieces and nephews as an excuse if you have to,” he said. “It really pays off. That's the way to hide it. You bring a child and say 'I'm only going for them’,” he jokes. “If children’s shows are done right, adults are entertained as well.”