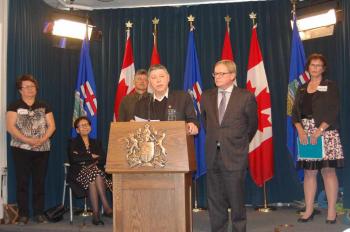 After almost eight years without a board, Northland School Division residents could be voting this October in up to 11 wards.

“The restoration of democracy is very important. It allows some stability and greater interaction with communities, and a sense of ownership as well,” said Education Minister David Eggen.

The Northland School Division Act is set to replace the existing act instead of amending it.

In 2010, then-Education minister David Hancock dissolved the Northland School Division corporate board, which consisted of 23 members, each representing a school in the division. The new Act would cut the number of trustees, setting a system of seven to 11 wards, each with a trustee.

The School Act establishes seven wards as the maximum for a school division.

To keep communications open between schools and the board, the Northland School Division Act establishes a formal engagement process that includes the wards, First Nations, Métis and other communities to which the division provides educational services, Treaty 8 First Nations of Alberta, the Métis Settlements General Council, and the school councils.

Local school councils will have a representative on the ward council in which their school is located. The ward council will also include that ward’s trustee and could include Elders.

The Act put forward by Eggen was the result of work undertaken by official public trustee Lois Byers and superintendent Gord Atkinson in engagement sessions that took place with about 200 members from the Northland division community from November 2016 to February.

Now, the Act will go back to the community for further input on the proposed ward system. The wards, for the most part, will be geographically based, which could see Susa Creek School getting its own ward because of its geographic status in the division. The result would be one trustee representing the school population of 30 to 35 students.

The wards are to be established by June 1 so the division’s electorate can go to the polls in October with the rest of the province to vote in a new school board.

“Generally we are pleased with this legislation. We know that the new Northland School Division Act will foster collaboration and encourage consultation with our communities and this is a very reassuring signal that our perspective is valued,” said Gerald Cunningham, president of the Métis Settlements General Council. Six of the eight Métis settlements fall within the school division.

Byers stressed that this new model focused on community involvement, a message she received clearly through the community engagement sessions.

“The solutions for communities will come from communities. The communities will guide their schools. They’re the ones who are going to make the difference in the success of their students,” said Byers, who will remain in an advisory role for a period of time after the election.

Establishing the school board is only one issue facing the school division. The systemic issues are not addressed in the new Act.

However, Eggen said that beginning in January 2018, the province will increase its per pupil funding for Northland School Division by 20 per cent. Depending on enrollment, that amount will total $5 million to $6 million. The increased funding will be provided to Northland School Division for five years. There will also be increased capital funding.

“We will be getting other ministries involved in the services in our schools. So working with the ministry of health, with advanced education, with children services to build programming that uses the school as a centre of delivery for those things,” he said.