MOU is an invitation to the federal government's party, says lawyer 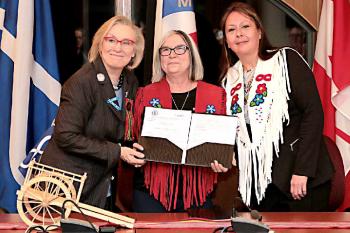 The Métis Nation of Alberta has signed a memorandum of understanding with the federal government that is intended to lead to a formal negotiations process.

The MOU, which establishes an exploratory discussion table, represents the second of six stages in the claims resolution process. It was signed Jan. 30.

In essence, said Jason Madden, counsel for the MNA, the federal government has informally accepted as a claim that Metis are a rights bearing community in Alberta.

The MNA has provided the federal government with submissions that Métis communities in Alberta meet the Powley criteria – a distinctive peoples of mixed ancestry who developed their own customs, practices, traditions and recognizable group identities separate from their Indian, Inuit and European ancestors – and therefore have Sect. 35 rights in the Constitution Act.

"This MOU has been a long-time coming for Alberta Métis. For many years at the federal level, we have been on the outside looking in,” said MNA President Audrey Poitras.

Talks with the federal government which led to the MOU began last summer.

The Daniels decision – which put Métis fiduciary responsibility in the federal government’s jurisdiction – and the federally-mandated Isaac report – which recommended that Canada “either amend its existing Comprehensive Land Claims and Specific Claims Policies, or develop a new policy that expressly addresses Métis Section 35 rights claims and related issues” -  along with new Prime Minister Justin Trudeau’s pledge of reconciliation to the country’s Aboriginal peoples, has created a “perfect storm and groups like the Metis Nation of Alberta … are making effective use of the opportunity,” said Madden.

“What’s significant is that in Alberta, we didn’t have to go to court to do that,” he said.

Madden points to court action having to be taken by both the Manitoba Métis Federation and the Métis Nation of Ontario.

“What’s pretty clear to me… in Daniels they talk about a duty to negotiate. I think if we weren’t here with this MOU and negotiations, the next case we would have taken (to court) is an obligation to negotiate and forcing the government’s hands,” said Madden.

Although this MOU is intended to lead to formal negotiations, Madden, with the firm Pape Salter Teillet, in Toronto, which has both First Nations and Inuit clients, admits that there are concerns with the federal government’s claim process.

“People can say the existing claims policies are no good, irritating, frustrating, slow, et cetera, but they are what they are. At the end of the day… they’re the only game in town on these things,” said Madden. “And if you haven’t even been invited to the party, and that’s the only place where these topics are … we at least want to get into that really bad party.”

“This MOU opens the door for us to finally put in place the government-to-government relationship with Canada (that) our people have sought for generations, as well as begin to address the pressing issues of our citizens and communities in Alberta, including dealing with Métis rights, lands and self-government," said Poitras.

Financial compensation and land will “absolutely” be part of the claim when it finally gets to negotiations, said Madden.

Both the provincial government and Métis settlements will be invited to participate in the exploratory discussion table.

However, the MNA and province will be signing a framework agreement of its own on Feb. 1.

“Daniels, in theory, means the federal government takes lead in issues, but that jurisdiction has to bring the other parties together and to the table. That’s the role of them. Alberta is an important partner in there. The MOU contemplates them becoming a full participant in those negotiations as well,” said Madden.

The MOU sets out an eight-month exploratory discussion process, which includes the MNA holding province-wide meetings to get input from members. The time frame, which Madden calls “pretty ambitious,” can be extended.