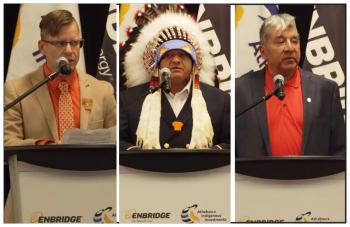 “We never surrendered the natural resources. When we signed the treaty with the Crown it was to the depth of the plow. That means six inches. So it’s been a long time coming. It’s probably been decades, I would say.” —Frog Lake First Nation Chief Greg Desjarlais
By Shari Narine
Local Journalism Initiative Reporter
Windspeaker.com

Athabasca Indigenous Investments would like to see the equity partnership struck with Enbridge Inc. on seven existing pipelines in northern Alberta set the benchmark with other industry partners.

“This partnership is historic and it’s landmark and it’s the way of a model for the way forward,” said Justin Bourque, president of Athabasca Indigenous Investments and CEO of Willow Lake Métis Nation. “I think a lot of industry, both oil and gas, and other industries out there will look to this partnership as…a model.”

The 23 First Nation and Métis communities in the Athabasca region announced Wednesday they had formed a company that now has an 11.6 per cent equity ownership worth $1.12 billion in the Enbridge pipelines that traverse their region.

Alberta’s Crown corporation, the Alberta Indigenous Opportunities Corporation (AIOC), is backstopping the investment to the amount of $250 million.

“It’s been an evolution of a relationship between Indigenous communities, industry, government and, too, society, and the wakening realization of Indian residential schools,” said Bourque.

The remaining funding for the Indigenous communities has come through bond and debt offerings from private investors, which was completed earlier in week.

The partnership agreement was negotiated over a six-month period.

But it has been decades in the making, said Frog Lake First Nation Chief Greg Desjarlais.

“Our belief is we never surrendered the natural resources. When we signed the treaty with the Crown it was to the depth of the plow. That means six inches. So it’s been a long time coming. It’s probably been decades, I would say,” he said.

Desjarlais stressed that the equity investment gave them a seat at the table as a partner instead of a stakeholder.

The process has also been an evolution for Enbridge, said CEO Al Monaco, a company that has been operating for more than 100 years.

“Over time we shifted, and I would say, accelerated our approach here from one that was pretty much around the basics… (of) consultation and accommodation and the regulatory standards that prevailed. But we ramped it up. We then focused on environmental stewardship and then on to economic benefits… But now we’re at the top level: economic ownership,” said Monaco.

Enbridge considered a number of different types of relationships it could engage in with Indigenous communities, including co-investment, said Colin Gruending, executive vice-president.

Gruending said when they became aware of the AIOC’s financial commitment to help Indigenous communities to invest in viable development, it was “the final piece.”

That the AIOC made a deal like this happen is exactly what the corporation was intended to do, said Premier Jason Kenney. The AIOC had been one of Kenney’s UCP government election promises in 2018.

“With this deal we have hit the mother lode,” said Kenney, who believes the agreement is the largest Indigenous energy partnership in North America to date.

“(This is) the game changer I have been waiting so patiently for for three-and-a-half years,” said Kenney.

Kenney is on the cusp of being replaced as premier as UCP members vote on a new leader, with results announced Oct. 6.

“For too many years First Nations and Métis communities…we didn’t have the ability or the seed capital to get involved in these projects,” said Desjarlais.

The pipelines—Athabasca, Wood Buffalo/Athabasca Twin and associated tanks, the Norlite Diluent, the Waupisoo, the Wood Buffalo, the Woodland, and the Woodland extension—collectively transport about 45 per cent of oilsands product.

The deal is expected to bring $10 million annually to the partnership communities.

With revenue from this investment, communities will be able to improve their housing, education and health and invest in programs and other economic ventures, said Stan Delorme, chair of the Buffalo Lake Métis Settlement.

Moving forward, Monaco said he would like to see Enbridge continue to partner with Indigenous communities through future renewables, carbon capture, hydrogen and natural gas projects and infrastructure.

Monaco said the equity partnership was not a one-off and would serve as a model for future interaction with Indigenous communities.

The Indigenous Resource Network has applauded the equity partnership between the 23 First Nations, Métis communities and Enbridge.

“Being owners and partners in our resource sector leads to real self-determination for our people,” said executive director Robert Merasty in a statement.

The network has launched an “ownership changes everything” campaign, which advocates for a national Indigenous guaranteed loan program, similar to the AIOC.

AIOC’s mandate was expanded in February to backstop agriculture, telecommunications and transportation developments, as well as the original natural resource development projects. The minimum investment threshold of $20 million remains in place to ensure projects are large enough to create significant and sustainable earnings for Indigenous communities.