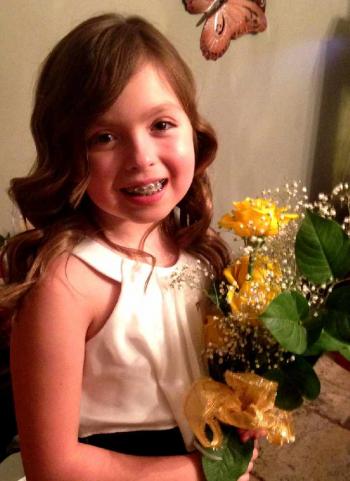 Anya Goulet has set herself a career goal: To become a Métis rights lawyer. And as far as the nine-year-old is concerned, one of the stepping stones along that path is the Little Miss Calgary pageant. Last Sunday, she finished first runner up.

After a few years of turning down the invitation from the Patti Falconer International Model and Talent Agency – mom Sharon Goulet had previously sent a portfolio and photo in on behalf of her daughter – Anya felt the time was right.

“She’s decided she wants to be a lawyer and so she wanted more practise with speaking publicly and what not. So this year she decided that might be a good way to sort of get some experience,” said Sharon Goulet, laughing. “It’s for her burgeoning law career.”

So the Grade 4 student at Strathcona Tweedsmuir kindergarten to Grade 12 school in Calgary made it happen.

Judging included two Saturdays of individual interviews with a panel of ajudicators. Then it was the big show on Jan. 15 at Evergreen Theatre. As part of the show, Anya had to demonstrate a talent, deliver a prepared answer to the question she had crafted, and, of course, walk the runway.

Goulet says Anya was prepared for it all. Mom and daughter practised the walk and they practised Anya’s question and response, which she had to deliver twice, once in English and once in French. Her question was why it is important to learn two languages.

“I’ve always said to her there’s nothing she can’t do, but do it well,” said Goulet about all the preparation that went into the big day.

Anya’s talent was a video of her synchronized swimming event in Regina last year.

Anya competed against 11 other six- to 10-year-old girls for the title of Little Miss Calgary.

“I don’t think she knew how well she could do. I think she was really surprised to even place,” said Goulet, who believes it is the first time an Indigenous girl has competed for the title since the competition began in 2001.

For Goulet it was an important accomplishment beyond her only child’s personal achievement.

“I think when I look at the (Truth and Reconciliation Commission), I do work in the community as well, and I see such change happening so fast that we do need our young people to step up and be the face of our community, but also say we can compete and be part of the larger community as well,” said Goulet. She is Métis. Her husband Adrian is Cree.

“We can be part of the larger society and I think people don’t expect us to be.”

As first runner up for Little Miss Calgary, Anya will spell off the winner in attending some of the approximately 150 social and community events throughout the year. Goulet expects Anya will be called upon to attend Indigenous events as well.

Goulet is hopeful that Anya’s success and subsequent exposure will encourage other young people.

“If other people see her as somebody that can do that maybe more people will do that in the future or other things like that,” she said.