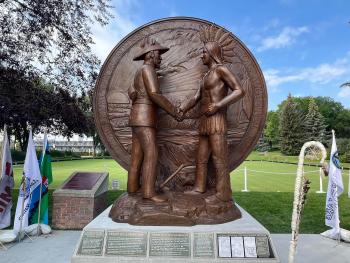 A monument marking the signing of the Treaty 6 adhesion is unveiled on the Alberta legislature grounds on Aug. 21.

“I hope that this unveiling would be significant to the education for people from Alberta and Canada to talk about the treaties and how reconciliation can be done.” — Grand Chief George Arcand, Jr
By Shari Narine
Local Journalism Initiative Reporter
Windspeaker.com

A monument unveiled at the Alberta legislature Sunday, Aug. 21, sits almost directly on the spot where the adhesion to Treaty 6 was signed in 1877 by area First Nations, some of which today are still fighting for status.

“I’m here today to watch the unveiling of friendship … and equal partnerships,” said Papaschase First Nation Chief Darlene Misik, whose band signed the adhesion but has no land.

In 2021, Misik led a charge against Canada seeking recognition and compensation. The lawsuit was dismissed by a federal judge. That decision has been appealed.

Papaschase is a band split over who represents them as chief and council. It had land on the southside of Edmonton and, “as far as we’re concerned…is part of the adhesion,” said Treaty 6 Grand Chief George Arcand, Jr.

The Michel First Nation signed the adhesion but “was the only group in Canada to be forcefully mass enfranchised,” said Arcand.

The Sharphead Band also signed adhesion but suffered a large number of smallpox deaths and other hardships. Band members scattered to neighbouring reserves, but many ended up in what would become the Paul First Nation.

“Ancestors of these nations’ people are still alive today and we hope that this recognition of Treaty 6 can be meaningful…for them today, as well in the hopes that their nations will get the recognition and the respect they deserve,” said Arcand, who is also chief of the Alexander First Nation.

Arcand and Misik were specially recognized along with the chiefs of the other signatories of adhesion, Chief Tony Alexis of the Alexis Nakota Sioux Nation and Chief Arthur Rain of the Paul First Nation.

The design of the monument is a tribute to a medallion gifted from the British Crown at the time of the treaty signing. It depicts a settler and a First Nations leader shaking hands. The monument has the pair raised from the background.

It was a vision that came to Harvey Young Chief in 2001. In this three-dimensional representation, the pair has “stepped out of time to reaffirm the sacred treaty relationship,” he said.

“Today is a day of celebration; celebration for our forefathers and their insight to create an agreement that allows us to live here today in harmony with our neighbours and other people,” said Arcand.

“I hope that this unveiling would be significant to the education for people from Alberta and Canada to talk about the treaties and how reconciliation can be done.”

“We are forever tied not only by our history but by the actions we take today as individuals and as a society to listen, to encourage positive change and to build a better future for all,” said Lakhani.

Alberta Indigenous Relations Minister Rick Wilson called treaties the “bedrock of the relationships” between First Nations and the rest of Canada. He said that all Albertans benefit when Indigenous peoples are successful.

Edmonton Mayor Amarjeet Sohi said the desire for reconciliation from Edmontonions had never been stronger.

He said the city made “a commitment to do our part on reconciliation…We have not always been perfect in our work, but with this relationship strengthening, we will always strive to be better.”

The Confederacy of Treaty 6 Nations conceived the monument project in 2001 to recognize, at that time, 125 years of peace and friendship between the First Nations and the different levels of settler governments.

It wasn’t until 2016, one year after the Truth and Reconciliation Commission released its final report on the legacy of Indian residential schools, that collaboration began between the municipal, provincial and federal governments and First Nations in response to the commission’s 94 Calls to Action.

The piece was sculpted by Herman Poulin and cast by Don Begg.