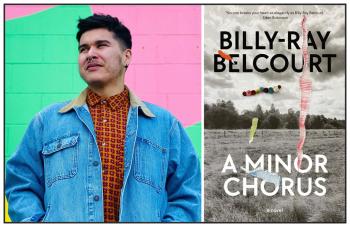 Author Billy-Ray Belcourt with the cover of his novel "A Minor Chorus".

“I’m partly interested in writing Indigenous books that are sometimes difficult to contend with at the level of language and technique. My books are also, I hope, works of art and I don’t want that to be lost on readers.” —author Billy-Ray Belcourt
By Shari Narine
Local Journalism Initiative Reporter
Windspeaker.com

Author Billy-Ray Belcourt is convinced that his debut novel A Minor Chorus is different than what his unnamed narrator would have written, despite both Belcourt and his creation sharing many of the same biographical details and working from the same material.

In A Minor Chorus, the narrator takes a break from writing his thesis to return to his home in northern Alberta. He plans to write a novel so he interviews family and friends of his First Nation about their experiences.

“It’s sort of perhaps something like asking two people to write about the same thing, with the same directive and they would create two totally different books. So I imagine that they would be different,” Belcourt told Windspeaker.com.

But it’s not something the reader discovers because A Minor Chorus ends before the narrator begins crafting his own novel. And thus the narrator never finds out, as he puts it, if “the fantasy that this novel or whatever it turned out to be would make me into a different person.”

Does Belcourt realize that fantasy, as he is the one who actually ends up writing a novel?

“That’s an interesting question,” he said. “For myself, I started the novel in a period of transition. I was finishing up my dissertation. I wasn’t sure where my life was going to go… I think that was why I was partly compelled to write a novel in order to solidify my desire to live with total commitment to art and to literature. So I think in that regards, the novel did change my life.”

A Minor Chorus unintentionally builds on Belcourt’s previous work. He was editing his memoir, A History of My Brief Body, while he was drafting his novel “so naturally there was some bleeding over of themes from the one project into the other.”

Belcourt even goes as far as to say the novel is in the genre of autobiographical fiction because he and the narrator share much in common. Both are Indigenous, queer and hail from northern Alberta. Belcourt is a member of the Driftpile Cree Nation. However, the characters the narrator interacts with are fictional.

“I wanted to do that because I was struggling to figure out how to inhabit other voices and I had become so comfortable with my own. And also I wanted to write a book about queer Indigenous life in Edmonton and northern Alberta and…how I can enter into that is by way of my own voice and my own emotional texture,” said Belcourt.

He admits his novel allowed him more freedom than what he found in writing his memoir or his debut collection of poetry, The Wound Is a World.

“My poetry and memoir, they’re very narrowing focus, which is to say, they’re about my own lived experience. I could zoom out with a novel and look at a larger history that implicates essentially all the people of northern Alberta,” said Belcourt.

The narrator of A Minor Chorus is unnamed, and it never occurred to Belcourt to name him.

“The characters that the narrator interviews, they don’t address him (by name) because they know who he is. He’s not unknown to them. So there’s that, and how in a rural place we’re all aware of one another. So we’re not strangers,” he said.

In those interviews, themes of loss, love, damage, loneliness, community and perseverance surface.

Through these interviews Belcourt breaks the fourth wall, directly drawing the reader into the narrator’s reflections.

“I write about the process of writing and the narrator reflects on what it means to want to write a novel (which) allows for a conversation to develop between the reader and author that doesn’t always happen in real life, but can happen over the process of reading,” said Belcourt.

The unnamed narrator also reflects on the “raison d’etre of the counterculture novel.” Counterculture generally refers to ideals counter to what contemporary society holds and this is a goal Belcourt strives for on a number of fronts.

“So I’m partly interested in writing Indigenous books that are sometimes difficult to contend with at the level of language and technique,” he said. “My books are also, I hope, works of art and I don’t want that to be lost on readers.”

Belcourt has been recognized with awards and nominations. A History of My Brief Body and The Wound Is a World were both finalists for the Governor General’s Literary Award. Belcourt is also the recipient of the prestigious Rhodes Scholarship and is an assistant professor of Indigenous creative writing at the University of British Columbia.

A Minor Chorus was longlisted for the 2022 Scotiabank Giller Prize.

As for Indigenous readers, Belcourt speaks to them directly through the title of his novel.

“It occurred to me when I started working on what would become the book that it couldn’t just be about one person’s life, that it had to be about a whole community. And so the community…that my protagonist interviews, they’re the minor chorus, and I use the adjective ‘minor’ not to indicate unimportance, but rather to show that they are living lives…the stories of which have been neglected and that’s what has made them minor,” said Belcourt.

He holds that “long-standing structural barriers” have kept Indigenous writers out of the publishing industry. Their stories and experiences have been silenced because they are not “interesting for the dominant public and I think that northern Alberta fell outside of people’s interest. Which was heartbreaking.”

Now, though, Belcourt points to Indigenous writers from northern Alberta like Jessica Johns, Darrel McLeod and Dallas Hunt as becoming a “critical mass” who are starting to make a difference.

A Minor Chorus, published by Penguin Random House, is available online through Amazon and Goodreads as well as in the bookstore.