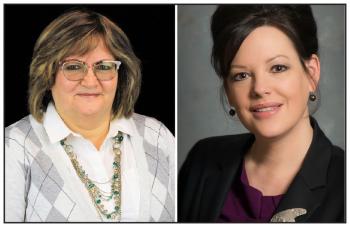 (Left) Jennifer Moore Rattray has been named a ministerial special representative who will advance work in the establishment of an ombudsperson on Missing and Murdered Indigenous Women and Girls, and (right) Rachelle Venne, CEO for the Institute for the Advancement of Aboriginal Women (IAAW) in Alberta.

“Definitely we are looking at going beyond the recommendations and developing implementation plans. Hopefully that will help having that ombudsperson.” chair of the Alberta Premier’s Council on Missing and Murdered Indigenous Women and Girls
By Shari Narine
Local Journalism Initiative Reporter
Windspeaker.com

“Good first steps” is what Rachelle Venne is calling progress on two critical Calls for Justice from the National Inquiry on Missing and Murdered Indigenous Women and Girls. Venne is CEO for the Institute for the Advancement of Aboriginal Women (IAAW) in Alberta.

On Jan. 10, Crown-Indigenous Relations Minister Marc Miller announced the appointment of Jennifer Moore Rattray as a ministerial special representative who will advance work in the establishment of an ombudsperson.

Moore Rattray, former executive director of the national inquiry, is a member of the Peepeekisis First Nation in Saskatchewan and currently chief operating officer at Southern Chiefs’ Organization.

Miller also announced the appointment of Innovation 7, an Indigenous organization headquartered in Pikwakanagan, Ont., to develop recommendations for an oversight mechanism to enhance accountability and track progress.

“I think those are two big steps that are important, but they should have been done probably a couple years ago for sure. Hopefully it results in something,” said Venne.

The national inquiry presented 231 Calls for Justice. Miller’s appointments addressed two of those calls, which come under the heading of “Human and Indigenous Rights and Governmental Obligations.”

Moore Rattray will move forward Call for Justice 1.7, which directs the federal, provincial, and territorial governments, in partnership with Indigenous Peoples, to establish an ombudsperson, with authority in all jurisdictions and to establish a national Indigenous and human rights tribunal.

While the focus of Miller’s announcement was on an ombudsperson, he did say that Moore Rattray would give him a “broad spectrum of advice on both” which could include mechanisms for accountability.

Miller offered no timeframe for Moore Rattray to complete her work, which will include meeting with survivors, families and organizations. He said she could, however, recommend interim measures for him to take.

Innovation 7 will address Call for Justice 1.10 and develop recommendations for an oversight mechanism to enhance accountability and progress in ending violence against Indigenous women, girls and gender-diverse people.

Miller said it should not be up to the different levels of government to evaluate their own performance.

Venne was one of about 200 people on a four-hour virtual roundtable that heard about the appointments prior to Miller making the announcement public.

The roundtable included federal, provincial, and territorial government representatives, as well as organizations and families.

“I think every minister that was on that call yesterday admitted that they’re not going as fast as they should be,” said Venne. “That’s what the community groups are saying, too.”

In the press conference that followed the roundtable, Miller said the federal government had to complement its talking with action and that action had to be done a “whole hell of a lot quicker.”

Venne said Miller did not disclose how Moore Rattray or Innovation 7 were chosen.

Miller publicly made it clear that he alone could not choose an ombudsperson. Had he done so, he said, it would “hamstring any ombudsperson.”

“We want to see what can be done in Alberta and how that position will help us,” she said. “Definitely we are looking at going beyond the recommendations and developing implementation plans. Hopefully that will help having that ombudsperson.”

Miller said that while the federal government’s results were slow, it didn’t take away from the work being done on the ground by Indigenous organizations “every waking hour to try and keep people safe.”

“We just make it happen,” said Venne. “Without the federal government we have to continue to meet the needs of the Indigenous women, the families (and) also just move forward some of those recommendations. The work does continue.”

Venne noted that IAAW is now considered a regional Indigenous women’s organization which allows it to be involved in the decision-making process at the national level.

Venne also serves as the chair of the Alberta Premier’s Council on Missing and Murdered Indigenous Women and Girls. The council is mandated to work with provincial government ministries to develop policies and programs to prevent violence and increase safety and economic security of Indigenous women, girls and gender-diverse people.