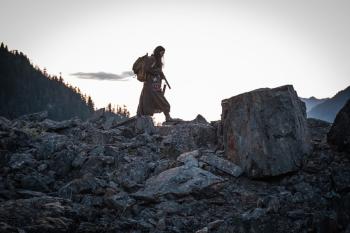 Morgan Holmstrom plays sâkowêw in Shadow of the Rougarou.

“I think a lot of people would agree with me there wasn’t much Métis anything on TV for me to see growing up. … I think it is important for other people to see, as well, that Métis stories can live on screen.” — Morgan Holmstrom, who plays sâkowêw in Shadow of the Rougarou
By Crystal St.Pierre
Local Journalism Initiative Reporter
Windspeaker.com

Shadow of the Rougarou is a tale of horror and family secrets.

“It’s essentially about sâkowêw, a Métis-Cree fur trapper, who must return home to her home settlement to confront her past while this ancient evil stalks her, and that’s the Rougarou. That’s essentially the Métis werewolf.”

The series will air on APTN lumi on May 9. It is a six-series show with a total running time of 39 minutes.

The story originates in Métis tales told in many communities over the past century. Waunch spent two years preparing for the show by speaking with Elders and knowledge keepers in order to ensure the story was as authentic as possible.

“The one thing that was really important to recognize and acknowledge, and we have a disclaimer to begin the show, is that being a communal story and a regional story it’s different from Métis community to Métis community. So, there’s not one telling of the story,” explained Waunch.

“The Elders that I worked with, we base it off what they were taught and what I heard growing up. I also tried to do just a general scope of the story.”

Waunch also spent a lot of time researching the time period during which the tale originates. He’s incorporated four different languages that were spoken at that time, including northern Michif, Chinook Wawa , English and Cree.

Elders, language users and knowledge keepers had to translate a lot of the script, while also teaching the actors the proper way of speaking because some of the languages aren’t commonly used anymore.

Clothing and costumes were custom made and based on the time period.

Waunch, who is a self-proclaimed historian, said he came up with the idea for the show after attending a 20th anniversary event of imagineNATIVE.

The stories, movies, documentaries and art presented at the event were extremely inspiring, but Waunch did feel as though something was missing.

“Leaving the festival, near the tail end of the festival, my only sadness was there was very few Métis stories being told there,” he explained. “As a Métis person myself I wanted to change that so it lit a fire (in him).”

Once Waunch returned home, he began writing the script.

“Most of the most amazing time for the Métis is the 1800s during the Northwest Resistance,” he said. “So many important historical things have happened during that time.”

Waunch also said he wanted the main character and the story to be told about a female, because in a lot of the books he reads there is very little mention of the roles women played during that time.

“This is why I wanted to see someone like sâkowêw as a lead in a show. I haven’t really seen that before in this capacity.”

Morgan Holmstrom plays the character of sâkowêw and said she was very honoured to be chosen.

“Just being on set surrounded by a bunch of other Métis people, I mean there’s nothing really like it,” she said. “It’s hard to explain. It means literally everything to me, and it does make me feel a lot closer to my culture.”

Holmstrom, 25, has played in a number of productions since she launched her career when she was 19, including having a part on the series Outlander.

The Shadow of the Rougarou and her role in the production is an opportunity for her to be part of what she hopes is more visual representation of her culture within the industry.

“I think a lot of people would agree with me there wasn’t much Métis anything on TV for me to see growing up. Being able to be part of something that is so close to home is very important to me and I think it is important for other people to see as well, that Métis stories can live on screen.”

A sentiment echoed by Waunch, who hopes the show will continue and viewers can watch sâkowêw continue on her journey.

“This is the first stop for sâkowêw on a long journey of discovering herself,” he said. “I just hope a show like this gets to continue on, and then we get to see more Métis stories that have never been shared before. And hopefully it encourages other Métis creatives, young and old, to start telling stories as well in whatever medium that is for them.”