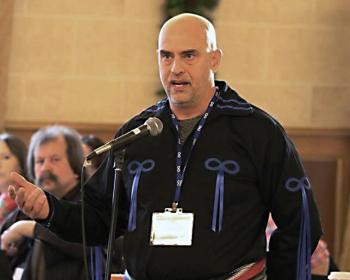 “There’s no hierarchy of rights. Our rights aren’t secondary to other Indigenous nations and we’re an autonomous, distinct Indigenous nation in Canada and we’re just providing clarification for something that has been known for quite a long time.” —Will Goodon, MNC spokesperson
By Shari Narine
Windspeaker.com Contributor
WINNIPEG

According to the Homeland Map Resolution, the Metis homeland is “that part of the historic Northwest encompassing today’s Prairie Provinces (Manitoba, Saskatchewan, and Alberta) and contiguous regions of north-eastern British Columbia, the Northwest Territories, northwestern Ontario and the northern United States.”

The posting by Windspeaker.com of the map on social media, along with Goodon’s remarks, sparked outraged response from members of the Blackfoot Confederacy. Comments on Facebook ranged from “… ya right there weren’t no Metis on Blackfoot territory… (Kainai Cory)” to “this is and always will be traditional Blackfoot land (Kyle Tailfeathers)” to “hahah haha this is a joke – right? (Chelsea Heavy Head).”

Kelsey Solway, spokesperson for Siksika Nation, said Chief Joseph Weasel Child would not comment on the map or member concerns, and denied Windspeaker’s request for an interview. Rick Tailfeathers, spokesperson for the Blood Tribe, said chief and council would have to discuss the map before issuing a statement.

“I understand folks’ fears, but I think we need to understand we all use the land and this was the land our people, our ancestors, used and lived on and traded on. They were part of the land before control by the Canadian state,” Goodon said.

Could the land be considered both First Nations and Metis land?, Goodon was asked.

“I don’t see why not,” said Goodon, who pointed to how some land is shared by First Nations in British Columbia.

In Alberta, Cabinet ministers preface all public remarks by acknowledging the traditional territory by Treaty number as well as “(recognizing) the Metis people of Alberta, who share a deep connection with this land.”

Goodon said that the Metis Nation did not need to consult with the Blackfoot or Cree—or any other First Nation—before drawing its map.

“There’s no hierarchy of rights. Our rights aren’t secondary to other Indigenous nations and we’re an autonomous, distinct Indigenous nation in Canada and we’re just providing clarification for something that has been known for quite a long time,” he said.

Goodon said the basis of the map was created in 1983 when the MNC was formed and has been only slightly altered over the decades since.

“As everything has evolved, one of the things that has evolved is the understanding of an Indigenous nation and its membership and its use of the land,” he said. Further historical evidence since 1983 has allowed the map to be tweaked.

Disappointment with the map and the corresponding report “Addressing the Integrity of the Historic Métis Nation Homeland,” was expressed by Margaret Froh, president of the Metis Nation of Ontario.

The MNO was called out for breaching citizenship requirements by unilaterally expanding the Metis homeland borders in order to admit members that do not adhere to the citizenship criteria adopted by the General Assembly in 2002.

In a statement released Nov. 29, Froh said, "We are extremely disappointed in this decision as it fundamentally ignores what MNO has been fighting for over the last quarter century. This report was in no way informed by any conversations with MNO. The MNO continues to fight for Métis rights and recognition. The MNO's government to government relationship with Canada and Ontario to advance Métis rights remains solid and strong.”

Goodon said MNO was not in the position to add what it considered “historic communities” on its own and such additions must be made by the entire Metis Nation. He adds that if evidence is brought forward, boundaries on the Metis Homeland map can be changed. At this point, the Metis Nation British Columbia is asserting there may be more Metis communities in that province.

The General Assembly placed the MNO on one-year probation setting out a number of conditions, all centring on membership, that must be met. If the conditions are not met, the MNO may be suspended from the MNC.

The Metis Homeland map, said Goodon, is just one more step taken by MNC as it moves forward in its relationship with the federal government and asserting Sect. 23 rights for its Metis citizens. The timing is particularly important in light of the sudden trend of people east of Ontario claiming to be Metis.

“It’s important to understand that, because there is a lot at stake and what our leadership has fought for since the days of Louis Riel, especially in the last 30 or 40 years, that we need to protect what we fought for for such a long time. So we need to have a good understanding of exactly who we are,” said Goodon.