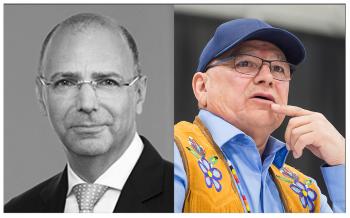 ““The Métis are not opposed to development generally speaking, but in the case of a project such as Rook 1, with what’s on its face a massive impact on the land base, Métis interests and rights must be fully respected.” —Tom Isaac, legal counsel of MN-S
By Shari Narine
Local Journalism Initiative Reporter
Windspeaker.com

The Métis Nation-Saskatchewan wants the court to stop NexGen Energy Ltd. from filing its draft environmental impact statement for the proposed Rook 1 uranium project until the energy company has fulfilled its obligation to negotiate an impact benefit agreement with MN-S “in good faith and a best efforts basis.”

Tom Isaac of Cassels Brock & Blackwell LLP, legal counsel for MN-S and MN-S local Northern Region 2, filed the statement of claim in the Court of Queen’s Bench for Saskatchewan on Sept. 8. The proposed mine is located within MN-S Northern Region 2.

“What the litigation is about is that in good faith the nation signed an agreement with NexGen that we would work toward reaching a common understanding. But it wasn’t just that. We agreed we would put best efforts into it … and it doesn’t make sense and we don’t understand why NexGen would agree to it and … (then) not live up to its contractual agreement,” said Isaac.

A study agreement was signed between MN-S and NexGen in early December 2019 aimed at negotiating an impact benefit agreement (IBA).

In a news release issued by NexGen, the company stated that the study agreement enabled NexGen to “formally engage … to identify potential impacts to Aboriginal and treaty rights and socio-economic interests and identify potential avoidance accommodation measures in relation to the Project ….”

None of the chiefs of those nations were available to speak with Windspeaker.com.

However, JFK Law advisor Matthew General, whose firm is representing Clearwater River Dene Nation, said in an email, "CRDN continues to engage with the Crown/(Canadian Nuclear Safety Commission)/proponent regarding the community’s significant issues and concerns with the Project and its potential to adversely impact the rights and culture of the CRDN."

Isaac says MN-S did not approach any of the three Dene Nations about joining in its litigation as “the action is focused on our contractual relationship with NexGen.”

The MN-S statement of claim alleges numerous occasions on which NexGen maintained “unreasonable positions”; ignored requests by MN-S for discussions and materials; did not uphold contractual deadlines; and circumvented the MN-S appointed negotiator going directly to membership.

“The deadline (of June 30, 2020) was of crucial importance to the MN-S who sought to have the IBA resolved in order to alleviate community concern and anxiety about NexGen’s intentions and motivations,” reads the statement of claim.

The proposed Rook 1 uranium project, in which NexGen has 100 per cent interest, is the largest development-stage uranium deposit in Canada. It is situated in the southwest of the Athabasca Basin, which is within MN-S’s Northwest Land Claim.

Isaac is also lead counsel for that land claim, which was made by MN-S in 1994. It is in abeyance as MN-S is actively undertaking research in relation to that legal action.

He stressed that neither the MN-S nor local Northern Region 2 are opposed to development.

“The Métis are not opposed to development generally speaking, but in the case of a project such as Rook 1, with what’s on its face a massive impact on the land base, Métis interests and rights must be fully respected. Canadian law supports that and it’s the right thing to do,” said Isaac.

While the MN-S has undertaken legal action, Isaac says there are still roles for the federal and provincial governments to play.

The Canadian Nuclear Safety Commission (CNSC) is the primary federal regulator for the project.

In February, the CNSC released its decision on the scope of an environmental assessment for the proposed Rook 1 project, setting late fall 2020 as the timeline for NexGen’s draft environmental impact statement. In the report, the commission stated that “CNSC staff submitted that it was satisfied with the preliminary Indigenous engagement activities carried out by NexGen.”

Isaac says they are waiting to hear back from CNSC now that the commission has the additional information filed by MN-S.

As for the province’s role, Saskatchewan will likely have to give smaller ancillary approvals and permits.

On Sept. 16, MN-S announced that it was taking legal action against the province, specifically challenging Saskatchewan’s 2010 First Nation and Métis Consultation Policy Framework. In its statement of claim filed with the Court of Queen’s Bench for Saskatchewan, the MN-S alleges that the 2010 policy is inconsistent with the province’s constitutional duty to consult and fails to uphold the “honour of the Crown.”

The MN-S wants the province to disclose all matters since 2010 in which the province should have given notice or consulted on. The claim also raises the province’s refusal to consult when issuing mineral interests within asserted Métis lands.

NexGen Energy Ltd. CEO Leigh Curyer did not respond to a request for an interview by Windspeaker.com.