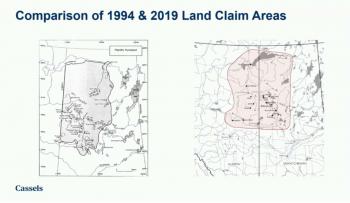 “When you look back on some of the historical documents, our Elders have always said that land is important, that we have to fight for land, and it seemed like some of the leaders lost sight of that and now it’s up to a new group to take up that fight...” — Dwayne Roth, legal counsel on the Durocher claim
By Shari Narine
Windspeaker.com Contributor

The Metis Nation-Saskatchewan will pursue its Morin (1994) claim for land in the northwest part of the province, which will continue to be negotiated at a land claims side table under its self-government agreement signed with Canada in June 2019.

“MN-S …. has been negotiating this land claim with Canada already, so this is an ongoing matter,” said Emilie Lahaie, legal counsel for MN-S, with Cassels Brock and Blackwell LLP. Lahaie was speaking to delegates at the National Conference on Metis Self-Government in Gatineau on March 10

That ongoing matter, however, has become more complicated with the filing of a competing claim. Metis plaintiffs from northwest Saskatchewan and northeast Alberta have joined forces in the Durocher land claim, filed in 2019 in federal court in Saskatchewan.

The Durocher claim includes almost the entire area in Saskatchewan that is part of the MN-S Morin claim. Land in northeast Alberta is also specified in the Durocher claim.

While the Morin land claim has had little movement for almost two decades, a framework agreement negotiated between the MN-S and Canada in 2017 rejuvenated the claim, said Lahaie.

Lahaie said the Durocher claim is seeking “essentially almost the identical things” being sought in the 1994 Morin claim: recognition of Aboriginal title and rights, ownership, possession, occupation, use and benefit of the claims land.

Dwayne Roth, who is one of three legal counsels on the Durocher claim, told Windspeaker.com that the Saskatchewan plaintiffs were getting tired of waiting.

“When you look back on some of the historical documents, our Elders have always said that land is important, that we have to fight for land, and it seemed like some of the leaders lost sight of that and now it’s up to a new group to take up that fight and continue that and make sure that the Metis people receive their fair justice in Canadian society and their place in Canadian society.

“That’s not going to take place until the scrip issue is resolved,” said Roth.

While Canada signed treaties with First Nations as land settlements around the time of Confederation, they dealt with Metis through money and land scrip, a certificate redeemable for land or money.

The scrip process was burdensome for Metis to claim land and made it easier for land speculators to purchase scrip certificates, benefitting from Metis economic hardship, often through fraudulent practise. Records indicate that only about two per cent of land set aside through scrip went to Metis. The majority of land was bought up by scrip speculators.

The plaintiffs in both court actions argue that Canada breached its fiduciary duty and obligation to Metis by imposing a scrip system which it knew would fail and, in so doing, destroyed the base of land and resources that Metis were entitled to. They are further arguing that Aboriginal title and rights to their homeland were never extinguished by the Metis.

The plaintiffs in the Morin claim, which was filed in the Saskatchewan Court of Queen’s Bench in 1994, were MN-S, the Metis National Council, the Metis Society of Saskatchewan Inc. (predecessor the MN-S Secretariat Inc.) and a number of presidents for Metis locals in northwest Saskatchewan.

Plaintiffs in the Durocher claim are individuals who are descendants of those who applied for scrip in the noted areas, as well as Metis locals and associations.

There are at least two individuals who have their names on both claims.

The plaintiffs on the Durocher claim, said Lahaie, are not, as far as the MN-S is concerned, representative plaintiffs of Metis in Saskatchewan.

Section 35 rights are collective rights and with land claims those rights can’t go to individuals, which is what the Durocher claim is asking.

Roth also said that, at this point, the MN-S is not a government as its self-government agreement only sets out the process by which that will happen, and is conditional upon favourable federal legislation.

The MN-S has filed a motion to intervene in the Durocher claim asking that the Saskatchewan portion be removed from the proceedings.

As far as Roth is concerned, it is too early for the MN-S to take that action. There are preliminary issues that need to be dealt with before intervener status is considered.

Canada has indicated it intends to bring a preliminary motion questioning the jurisdiction of the federal court to hear this claim, he said.

“I don’t agree with their position. I believe federal court is the appropriate place. The Metis are federal jurisdiction. That was clarified by the Daniels decision by the Supreme Court of Canada in 2016. The plaintiffs overlap two provincial jurisdictions and their claim predates the Alberta-Saskatchewan boundary of 1905, so the alternative would be if it’s not the federal court, it would be two separate provincial actions, which wouldn’t make sense when its one claim area,” said Roth.

He doesn’t expect the procedural issues to be resolved until summer.

The MN-S legal motion also calls for the removal of the Durocher legal counsel and cites conflict of interest.

The MN-S claims Clement Chartier, who is representing the Saskatchewan interests in the Durocher claim, and Roth, who represents the Alberta interests, are in conflict.

Chartier’s name is attached to the 1994 claim, while Roth, who is also past president of the MN-S, worked for MN-S as a lead negotiator, but said at that time MN-S also had separate legal counsel.

While Roth asserts he’s not in a conflict of interest, he said, “I’m seeking some clarification, some legal advice of my own, speaking to my clients in northeast Alberta to get their direction and we’ll decide accordingly in a couple of weeks.”

Roth contends that Chartier’s representation in the Morin claim marks “a completely different claim” than what he is working on now, which involves two provinces and different plaintiffs.

“The MN-S has been working on this claim since 1994. It’s continued to work on it at the negotiation table with Canada. So when you have a competing claim come up like that, that’s put forward by individuals who are not the representative plaintiffs, obviously this causes issues with your negotiations,” said Lahaie.

“We’re not talking about land ownership,” said Roth.  “We’re simply seeking declaration saying the scrip did not extinguish Indian title of the Metis and that we still need to resolve that by way of negotiation with Canada.”

Roth said he would prefer to negotiate the issue rather than litigate it. However, he said reconciliation tables that have involved the Metis Nation of Alberta and the federal government have not included his clients.

Lahaie said addressing land claims issues is “probably one of the most important issues for the MN-S.”

In February, the MN-S announced it was contributing $750,000 to advance the mapping process which is necessary to move forward on discussions with Canada on outstanding land claims.