Métis Nation of Ontario and federal government building their relationship 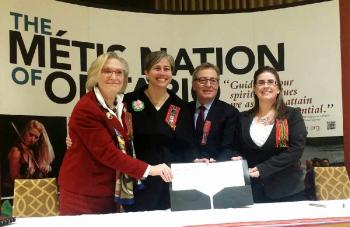 The procession entered the Dominion Ballroom of Toronto’s Sheraton Hotel for a ceremony on Feb. 3 to sign the Memorandum of Agreement (MOU) between the federal government and the Métis Nation of Ontario (MNO).

About 100 people were gathered to witness the signing. Citizens and staff of the MNO were joined by Toronto’s Deputy Mayor Pam McConnell and Monte Kwinter, member of the Ontario Legislature since 1985.

This is a historic day, said Tera Beaulieu, President of the MNO Toronto and York Region Métis Council.

“This is a big day. This is a huge day for our nation of people,” she said. “I’ll be able to tell my son I was here on the day that Canada recognized us and recognized our relationship and how long overdue this is,” said Beaulieu.

The MOU, said Minister Bennett in her address to the audience, “marks the beginning of a stronger relationship with the MNO and a commitment to reconcile long-standing matters that date back to the early years of Confederation… Our aim is to arrive at a framework agreement that will define a shared approach to reconciliation… developing an approach that will work for both parties.”

President Margaret Froh said remarkable progress has been made in the last 15 months. “This has been a whirlwind for us,” she said. The last 150 years, “for the Metis have been 150 years of being made to feel invisible, having been ignored, having been shuffled off to be somebody else’s problem, having been pushed off our lands into other space, not being recognized for our place in this country…It’s absolutely stunning to think of where we might be in 150 years from now,” said President Froh.

The principles that the Prime Minister has articulated for forging a new relationship with Indigenous peoples—recognition of rights, respect, partnership and cooperation—are exactly the right principles needed in order to move forward, Froh said.

“Those have to be in the foundation for any process of reconciliation.”

Our goal through this MOU, she said, is to actually get a framework agreement within the next eight months, to get a mandate to go into formal negotiations for self-government.

Minister Zimmer said this is, “a very, very important occasion and I do want to recognize the very long history, the very significant contribution that the Métis have made to Canada, to Ontario.”

He cited the Ontario government’s eight-year experience in working with the MNO. Ontario and the MNO signed their first five-year framework agreement in 2004 and renewed it in 2014.

“I can tell you that the progress and the initiatives and the thinking outside the box that has gone on in the context of these frameworks, I want to say it really, really does work at every level.”

Froh and the Ministers were available to Windspeaker.com following the signing ceremony.

Asked what the MOU means in practical terms for MNO citizens, Froh said it means recognition for Métis people and respect for their rights under Section 35 of the Constitution. It’s a commitment at how, “we can establish the grounds for a negotiation of self-government,” she said, and “…when we get a framework agreement, that basically signals the government of Canada has provided a Cabinet mandate to negotiate self-government with us.”

Reconciliation for citizens of MNO means identifying priority areas to be addressed in the negotiations with Canada.

“The needs of our citizens are very similar to other Indigenous peoples as well and ultimately what this is all about is improving the lives of our children, our families, our communities on a whole range of issues.”

When asked if these developments would raise issues with First Nations groups, Froh said she suspected they would. A lot of confusion and anxiety was created by the way the Daniels decision was portrayed in the media, she said.

For a very long time, said Froh, our leadership has said Canada and the province must respect Aboriginal and treaty rights and when First Nations have been fighting, we have stood with them.

“We’ve also said that can’t be at the cost of also respecting Métis Aboriginal and treaty rights…we’re not interested in taking away from anything that any other Indigenous people have.”

“As Métis, as First Nations and as Inuit, we will always be stronger standing together than we will ever be standing apart and pitted against each other,” Froh said.

Froh said the MNO was not part of the pop-up groups that sit in a mall and demand $25 for a Métis card.

“The reason events like today matter is not only for the MNO, but for all the Canadians that didn’t learn anything about this in school… it’s again about this conversation with Canadians about a distinctions-based approach, the difference between First Nations, Inuit and the Métis nation.

“This is a part of us building that reconciliation and it can’t just be government-to-government. It’s going to have to be all Canadians with all the citizens of the Métis nation.”