Métis chef excited to be part of food, film fest 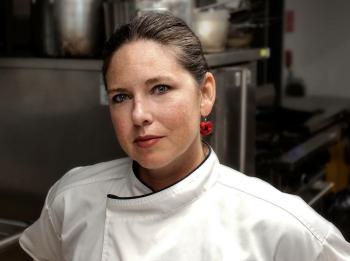 Métis chef and culinary consultant Jennifer Lessard is headed to the East Coast on Tuesday to be part of the internationally acclaimed Devour! The Food Film Fest in Wolfville, N.S.

“I love feeding people. I love sharing the ingredients from here and talking about how nutritious and amazing and significant they are,” said Lessard. She recently started her own business called Inspired by Nature Culinary Consulting, which is located in Lumsden in the Qu’Appelle Valley in Saskatchewan.

Ever since she received the invitation to attend the festival, which runs from Oct. 19 to Oct. 24, Lessard has been harvesting and preparing the food from her home province which she will be taking along with her to produce her culinary delights. Among those ingredients are squash, nettle, Saskatoon berries, chokecherries, mint, sunchokes, tamarack branches, juniper tips and “so many things.”

“With Métis … gardening was a huge thing, even more than berry-picking and gathering. I was kind of the outlier. Even as a little kid I wanted to be out picking. So gardening was a good fit for me. My fondest memories of my grandmother are her in her tiny little garden in Prince Albert, Saskatchewan, gardening up a storm,” said Lessard.

Devour! The Food Film Fest is a collaborative event with the Glooscap First Nation and has helped to celebrate and bring international attention to the Mi’kmaq ways, said Chief Sidney Peters.

“(It) is an important vehicle for advancing awareness of Indigenous culture by celebrating First Nation communities, filmmaking and food,” said Peters.

Devour! is Canada’s largest food and film festival and the biggest of its kind globally.

It’s not a unique concept for Lessard, who opened her first restaurant, The New Ground Café, in Birch Hills, Sask. with that very same view, focusing on food, art and music. She ran the restaurant for eight years.

“Food and film. It’s right up my alley,” said Lessard.

For Devour!, Lessard, like the other seven chefs, was assigned a film to watch and asked to prepare a plate of food that fits.

Lessard has paired an Askiy (meaning “earth”) garden salad topped with dried bison meat to fit the 2020 documentary Kiss the Ground narrated by Woody Harrelson. The film is about regenerative agriculture, which looks at how bison naturally rehabilitate the land.

“I had seen that first-hand because when I was at Wanuskewin (Heritage Park) as chef, the bison was returned to the land in two separate herds. It was just this incredible spiritual thing to be part of,” said Lessard.

In 2019, Lessard became the first female and Métis executive chef at Wanuskewin and now serves as the park’s Indigenous culinary consultant. In that position, she created and continues to refine the Han Wi Moon dinner series. Lessard explains it is outdoor dining, served six to eight times a year, done in tune with the moon cycle. Ingredients for the meal are gathered from the park.

Lessard’s Askiy garden salad contains ingredients from Saskatchewan, maple syrup from an Indigenous company in northern Quebec, and microgreens from Nova Scotia.  It will be served on a plate that is compostable.

Lessard will also be leading an Indigenous Culinary Master Class for Youth workshop. A maximum of 50 youth can attend the class in person, but there will also be virtual participants. While youth won’t be preparing the entire meal, they will be getting hands-on experience by taking the flesh off of rosehips and tearing apart dried saskatoon berries to add to the meatballs for bullet soup.

“I want them to be hands on with the ingredients that mean the most to me and that I’ve been working with since I was a kid,” she said.

Lessard “jumped into” cooking when she was 14 years old and has had no formal training.

“I’m always trying to soak up knowledge,” she said, which is why she is particularly excited about being able to participate in a culinary workshop offered by Heikki Nikula, a Sami chef from Finland who will be cooking with reindeer.

Lessard will also be part of a drive-in, where the chefs will be outside cooking gourmet “snacks” which people will enjoy in the comfort of their vehicles while watching short movies.

“That one is kind of the most technically difficult one. I’m doing little bison skewers seasoned with sage and yarrow… I have harvested a whole bunch of fallen tamarack branches and I have to clean them, shave them down a little bit and that’s what the bison is going to be skewered with. It’s on top of a nettle sunchoke potato puree with a little chokecherry glaze.”

About one-third of the food Lessard is working with comes from home.

“It’s been a labour of love to harvest and prepare everything,” she said.

This year marks the 11th installment of Devour! The Food Film Fest. The theme is Global Indigenous Cinema and Cuisine, and features more than 45 events, with a wide range of culinary workshops and film screenings, both in-person and online.

The Indigenous cinema features perspectives, visuals, and stories from more than 20 individual nations with Canada representing about one-third of the film component with five features and 10 short films.

The festival's special guest is award-winning playwright/musician/novelist Tomson Highway, who will be delivering a workshop on Indigenous Voices on Stage and Screen. Highway will also headline a fundraising concert and reception on Oct. 21.

The opening ceremony is Oct. 20.

Check out the events at: https://devourfest.com/archives/2021-program/