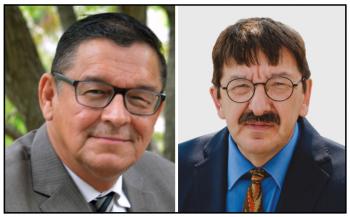 “Obviously, you have to be inside of government to make things happen and that’s where I want to go.” — Buckley Belanger, Liberal candidate for Desnethé—Missinippi—Churchill River
By Shari Narine
Local Journalism Initiative Reporter
Windspeaker.com

Two Métis candidates are hoping to become blemishes on the Conservative’s perfect record of sending a full complement of 14 Members of Parliament from Saskatchewan to Ottawa.

Robert Doucette, who is running for the New Democratic Party in the Saskatoon-West riding, aims to become the first Indigenous MP to represent an urban riding in Saskatchewan.

Buckley Belanger, running for the Liberals in Desnethé—Missinippi—Churchill River, wants to be a voice on the inside of the government for his northern riding and Indigenous people.

Both men are strong candidates with public recognition in the political field, although their choice of federal parties may come as a surprise.

Doucette, who has been involved in Métis politics for 30 years, is the former president of the Métis Nation-Saskatchewan and presently is the executive director of the Saskatoon Indian and Métis Friendship Centre. In those positions, he has worked closely with the Liberal government and says he has “felt betrayed as an Indigenous person” by Crown-Indigenous Relations Minister Carolyn Bennett.

Doucette draws attention to the exclusion of Métis from the Sixties Scoop Settlement Agreement reached in 2017 despite, he says, Bennett’s promise to include Métis. The Liberals came to power in 2015.  It took until this past July for the court to issue a certification order for a similar class action undertaken by Métis and non-status Indians.

“There’s lots of examples of why I’m running for the NDP… I want a leader and Jagmeet (Singh) is that person. Where he says, he or she, is going to do something and they actually do do it if they’re given a chance,” said Doucette, who says his personal values align with the NDP and his family has always voted NDP.

For Belanger, it’s been a move in the other direction. Although first being elected as a Liberal in 1995, Belanger has served in the Saskatchewan legislature as a member of the NDP since 1998, including as a member of the Cabinet for two NDP premiers.

“You’re sitting there as an elected NDPer, a provincial MLA, and you’re frustrated. I could have stayed there for three more years and collected a pay cheque and I just didn’t think that that was something I wanted to continue doing … If (running for the Liberals) was going to move the agenda for my people in my riding and make things a lot better, then it’s important that I keep that in mind,” he said.

Belanger says it was his lobbying for his constituents in the northern provincial riding of Athabasca that brought his name and work to the attention of federal Cabinet ministers and resulted in Prime Minister Justin Trudeau asking him to join his team.

Belanger is reluctant to draw parallels between his personal invitation from Trudeau and the personal recruitment of First Nation’s candidate Jody Wilson-Raybould in 2015. Wilson-Raybould resigned from the Liberal caucus in the midst of a political scandal that implicated Trudeau and was re-elected as an independent in 2019; she is not seeking re-election this time around.

“I don't know all the particulars and all the circumstances,” he said about Wilson-Raybould. “Any candidate, including me … has to have a team discipline, and that's how you get things done. And sometimes opinions can be very strong from people and lots of times it is difficult to keep the team intact, but I know being in Cabinet in Saskatchewan … you can certainly push your ideas and get your concepts to bring forward changes and if you get the support of the caucus and the Cabinet, you see those changes occur. But ... you still have to have a structure. You’ve got to have a team. You’ve got to have discipline. Those are prerequisites to being a good MP.”

Belanger points to Ontario, Quebec, the Atlantic provinces and British Columbia as having representatives within the government. He says Indigenous peoples and the prairie provinces also need representation. There were six Indigenous Liberal MPs elected in 2019.

“Instead of sitting at home hoping things happen, I want to be in there to drive the change and speed up the process,” said Belanger.

Doucette emphasizes that neither he nor the NDP are running to come in second or third, but he does point to the pivotal role the NDP played in a minority government during the coronavirus pandemic, which included getting the Liberals to double the Canada Emergency Response Benefit (CERB) from $1,000 to $2,000 a month and ensuring that small businesses got support.

“The NDP kept the Liberals and Conservatives honest in parliament,” he said.

A Mainstreet poll of the Saskatoon-West riding from Aug. 21 to Aug. 25 shows the NDP in a tie with the Conservatives, both with 33 per cent support.

Doucette says Saskatoon-West has substantial Indigenous, ethnic and diverse populations and if those numbers come out to the polls in strength, they “can have a huge impact in this riding.”

He also points out that incumbent Brad Redekopp was one of the 13 of 14 Saskatchewan Conservatives to vote against a bill to ban conversion therapy. That bill died in the Senate because of the election call.

Doucette said he has been door-knocking and has heard concerns about housing and the need for the NDP-proposed pharmacare (government-coverage costs for medicine). He stresses he has been following a strict protocol set out by the NDP for campaigning.

“A lot of the NDP supporters have said we need to carry forth with the 94 recommendations from the (Truth and Reconciliation Commission on the legacy of Indian residential schools). And also to ensure that the living conditions, the conditions that Indigenous people find themselves in, has to be rectified. And the NDP party has made that a priority,” said Doucette.

He underscores Singh’s early stop in the campaign at the Cowessess First Nation and meeting with Chief Cadmus Delorme to bring attention to the unmarked children’s graves found at the former residential school site and the experiences of those who attended residential schools.

Doucette is trying to return the Saskatoon-West seat to the NDP who won it in 2015.

Belanger says “folks delivering food hampers from the federal Liberal government” during COVID-19’s community lockdown and the availability of CERB to help feed families and pay for utilities illustrated the concern the Trudeau government has for Indigenous people.

He says the Liberals have also lifted the majority of boil water advisories on First Nations and has pledged to continue with that work.

As for the criticism the party has faced for not meeting enough TRC Calls to Action or yet to implement a national action plan to deal with the recommendations from the Missing and Murdered Indigenous Women and Girls national inquiry final report, Belanger said, “When I spoke to the Prime Minister … he is very, very committed to working with me if we are successful and, obviously, he said he will continue to work even if we are not. We made great strides on that front. Obviously, you have to be inside of government to make things happen and that’s where I want to go.”

Belanger has a “4-H” campaign for the priorities in his riding: housing, highways, hope and healing. He says adequate housing, safe highways, and services for healing all “fit together” to give people hope.

Beside Vidal, Belanger is facing two other candidates who are both Indigenous. Harmonie King, a Métis, is running under the NDP banner, while Nasser Dean Chalifoux, non-status First Nations, is running for the Greens. Belanger is not concerned that the Indigenous vote – the riding is 71 per cent Indigenous – will be split and incumbent Vidal will maintain the seat.

“I’m the only northerner. I understand the challenges and that gives me a distinct advantage,” said Belanger, whose home in Île-à-la-Crosse puts him further north than any of the other five candidates. There is also an independent (Stephen King) and a candidate from the People’s Party (Dezirae Reddekopp).