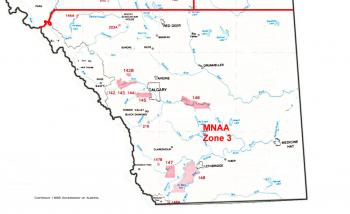 Region 3 members are “not pleased” with the agreement, but the Metis Nation of Alberta says it made strategic sense to agree to preclude a harvest in southern Alberta “rather than totally going against a harvesting agreement that would support so many of the things that we have fought for.”

“Alberta took the stand that they will not talk about the south. That’s where we ended up...” — MNA President Audrey Poitras
By Shari Narine
Windspeaker.com Contributor

The Metis Nation of Alberta has signed an agreement with the province that does not allow Metis hunters, trappers and anglers to claim southern Alberta as part of their traditional territory.

That interim agreement allowed Metis to subsistence hunt, trap and fish on Crown lands and private lands (with permission) and any body of water in the province, with the applicable license.

In 2007, the IMHA was unilaterally cancelled and a new policy implemented by the Ed Stelmach Progressive Conservative government of the day, which severely restricted where Metis could harvest and excluded harvesting rights for Metis living in southern Alberta.

At the same time, a Metis man, Garry Hirsekorn, was charged with hunting without a license in the Cypress Hills area. The MNA used the Hirsekorn case to challenge the province for changing its policy on Metis harvesting rights. However, Hirsekorn was found guilty and fined by the lower court, which found insufficient evidence to support the claim of Metis presence in the area prior to 1874. The appeal court upheld the decision and the Supreme Court of Canada refused to hear an appeal.

“The Hirsekorn case very much informs (this agreement),” said MNA President Audrey Poitras. “Alberta took the stand that they will not talk about the south. That’s where we ended up with.”

However, the Metis Harvesting Agreement allows for the establishment of a discussion table “in recognition of matters the MNA has raised as important to them” which includes harvesting rights in southern Alberta.

“What we will do is provide the historic evidence that was also in the courts that I don’t believe anybody took into consideration… Provide our evidence to hopefully have (the Alberta government) see that there should be harvesting rights in the south… There is as much historical evidence down there as there is any other part of the province,” said Poitras.

She admits that the MNA’s Region 3 members (southern region of the province) are “not pleased” with the agreement, but it made strategic sense “rather than totally going against a harvesting agreement that would support so many of the things that we have fought for.”

The Hirsekorn decision did recognize that Metis communities were regional and not restricted to the settlements that exist in the province. It also recognized Metis presence along the North Saskatchewan River in central Alberta. This is a change reflected in the new agreement, which opens up 75 per cent of the province to Metis harvesters. At this point, Metis harvesting has been restricted to 100 km radius around existing Metis communities.

One of the biggest gains with this agreement, says MNA legal counsel Jason Madden, is that Metis citizens will not be getting their harvesting licenses from the province. Instead, once Metis citizens have proven their traditional connection to a harvesting area, the MNA will be issuing them stickers. The MNA will also, eventually, be issuing stickers to those who are not MNA citizens.

“The MNA is representative of the community. While people may not want to sign up for MNA membership, there needs to be a way to ensure those people are also legitimate rights holders and the MNA has a role in doing that,” said Madden.

The agreement states that “Alberta will seek the advice of the MNA on the establishment of an objectively verifiable system to identify Metis Harvesters who are not MNA Members or who do not wish to be identified as Metis Harvesters by the MNA.”

As of Sept. 1, 2019, Métis harvesters will require only a Metis harvester identification sticker on their MNA citizenship card to be able to harvest in their traditional territory.

The new agreement also recognizes the right of trappers to pass down their traplines to family members and allows Metis to fish with a rod and reel and not just a net.

Also to be included in the discussion table is commercial harvesting and mobility of Métis harvesters. Mobility includes not only harvesting rights within the province of Alberta, but also beyond provincial borders.

“That definitely will be part of the discussion because, as we know, we moved westward. There is mobility from one province to another. At the time we’re talking about traditional harvesting, there weren’t provinces, there weren’t lines,” said Poitras.

She is hopeful that the collaborative work between the province and the MNA will continue and that negotiations will keep the matter out of the courts.

An upcoming election is a concern, says Poitras.  The Metis Harvesting Agreement was signed the day before Premier Rachel Notley dropped the writ for the next election. Voters will be going to the polls on April 16.

“But I’m wanting to believe as we’ve moved along and things have changed, reconciliation has certainly been talked about by all parties. I’m of the belief, I think we have a harvesting agreement that will be recognized by all parties and be accepted as we go forward,” she said.