MCK refuses to give up its inherent jurisdiction over gaming 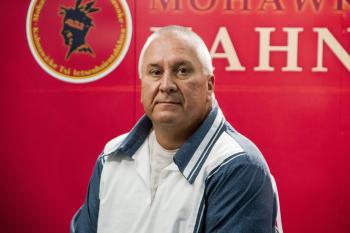 The Mohawk Council of Kahnawà:ke would “rather be known for fighting for the jurisdiction than just allowing it to be whittled away or taken away from us.” — Council Chief Mike Delisle, Jr.
By Shari Narine
Local Journalism Initiative Reporter
Windspeaker.com

The Mohawk Council of Kahnawà:ke (MCK) is taking legal action against the Ontario government and iGaming Ontario claiming that the province’s iGaming scheme is not only illegal, but also unconstitutional.

“Since time immemorial,” reads the Notice of Application that was filed in the Ontario Superior Court of Justice on Nov. 28, MCK has had a “longstanding interest in gaming and wagering, which have been an integral part of Mohawk culture…”

That practise for the past 25 years, said Ratsenhaienhs (elected Council Chief) Mike Delisle, Jr., has turned into tens of millions of dollars for MCK in online gaming. That money has been fundamental in providing financial stability and jobs to the community.

MCK’s Kahnawà:ke Gaming Commission (KGC) operates as a stand alone and independent gaming commission, “which is world renowned,” said Delisle, pointing out that the gaming commission has signed memorandums of understanding "across the globe” and only Quebec and Canada don’t recognize its jurisdiction.

Kahnawà:ke is located south of Montreal.

iGaming Ontario, a subsidiary of the Alcohol and Gaming Commission of Ontario (AGCO), began operating this past April, and since then MCK has lost “significant income,” said Delisle, because the iGaming regime prevents all other gaming regulators, including Mohawk Online and gaming operators licensed by the KGC, from carrying out gaming activities in Ontario.

At this point, the only way Mohawk Online can continue to operate is if it is registered by the AGCO.

And that’s not happening, said Delisle, despite some of the gaming operators licensed by KGC having already “jumped ship” in order to operate in Ontario.

“We’re not giving up on the jurisdiction we built. The gaming commission has been a longstanding institution here in the community,” he said.

Delisle added that MCK would “rather be known for fighting for the jurisdiction than just allowing it to be whittled away or taken away from us.”

Ontario’s interpretation of amendments to the federal Criminal Code are impacting MCK and forcing the community into court, Delisle said.

The Criminal Code was changed to allow for “lottery schemes conducted and managed by the government of a province in accordance with any law enacted by the legislature of that province,” says the Notice of Application.

MCK asserts that instead of Ontario itself running the online gaming operations in accordance with the Criminal Code, Ontario is allowing private operators to be responsible for owning and operating their own proprietary platforms; for key-decision making activities; for meeting compliance obligations; for having authority to retain suppliers; and being allowed to retain 80 per cent of the profit generated by the iGaming scheme.

MCK is asking for the court to quash the new online lottery scheme, which it calls ultra vires (meaning “beyond the powers”) because it is conducted and managed by private operators and not the Ontario government.

“We don’t like the court system and we didn’t want to do this in terms of the challenge. But again, based on no other alternative and the fact that we haven’t had any concrete discussions along the way in a course of what’s leading to almost four years now,” said Delisle.

He said concerns raised with Prime Minister Justin Trudeau and Attorney General David Lametti over the impacts the amendments to the Criminal Code would have resulted in no action. Even presentations in front of parliamentary committees had no effect.

Delisle said MCK was after a “legislative carve-out” in the federal amendments to the Criminal Code, which would allow Indigenous communities to continue to operate on the strength of their own jurisdiction. He said they would continue to push for that carve-out.

A carve-out was not asked for in the court action as that is not a legal remedy available to the courts.

“We felt we had no other recourse but to take this to a court system,” said Delisle.

While MCK is taking court action on its own, Delisle says they have received notification that other First Nations are supportive.

“We’re not asking for people to join right now…Who knows what will happen in the coming days, weeks,” he said.

Delisle said that while he understood that there was strength in First Nations coming together, he also understood that gaming money was “still substantial for some of the smaller communities.”