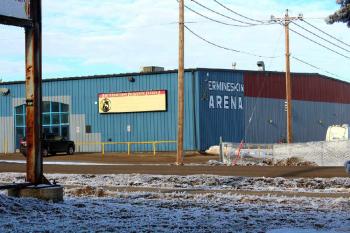 This is the arena that will be upgraded if Maskwacis the Kraft Hockeyville contest. Photo by Tara Cutarm

The National Hockey League could be coming to Maskwacis. Members of the central Alberta community found out this past weekend that Maskwacis is one of the 10 finalists that were selected in this year’s Kraft Hockeyville contest.

The community that eventually wins the grand prize in this annual contest will be awarded $100,000 to be used towards arena upgrades. And it will also earn the right to host a National Hockey League pre-season game.

The runner-up in the contest will also receive $100,000 to make improvements on its local facility. And the other eight finalists will get $25,000 each for rink upgrades.

The 10 finalists were announced nationally during a Hockey Night in Canada broadcast on Saturday. Maskwacis, formerly known as Hobbema, consists of four First Nations, including the Ermineskin Cree Nation, home of the Neyaskweyahk Arena. It is this facility that will be receiving funds for improvements.

And if the community is successful in winning the grand prize, it would also stage the NHL exhibition match.

Tara Cutarm, the communications director for the Ermineskin Cree Nation, said word got around quickly following Saturday’s announcement. Members of the community started phoning and texting each other with the news shortly after it was broadcast.

Cutarm said she was shocked Maskwacis was one of the 10 finalists chosen. More than 2,900 communities had been nominated in this year’s contest.

“That’s 40 per cent of all the arenas in Canada,” Cutarm said. The nomination period began on Jan. 1 and continued until Feb. 5.

The next stage in the contest will begin this Sunday. The public will have the opportunity to log in online at www.khv2017.ca and vote for the community they want to see win the grand prize.

The voting window is rather small. Besides Sunday, the public will also only be allowed to vote on Monday as well.

Having already advanced to this level, Cutarm is now hoping Maskwacis wins the contest’s grand prize.

“I think it would be a huge thing for our community if we were able to get an NHL game here,” she said.

Cutarm said she’s noticed previous winners in the contest, which has been running for 12 years, have had rallying stories behind their victories.

She’s hoping people from across Canada vote for Maskwacis, a community which in recent years has been plagued with serious social issues, including youth suicides and violent crimes.

“It’s still an ongoing concern,” Cutarm said. “That’s why a hockey facility is so important in our community.”

Randy Ermineskin, the chief for the Ermineskin Cree Nation, is the one who had nominated his community in the contest. In his nomination application Ermineskin had written specific details about how upgrade money would be spent at the local arena.

In a radio interview with Jeremy Harpe of CFWE-FM, Chief Ermineskin said a buzz is being created now that Maskwacis is one of the 10 finalists.

“I think the excitement is even outside of Maskwacis,” he said. “People from everywhere have been texting and are happy for us. I think it’s going to build.”

Ermineskin said his community’s minor hockey program this season has 330 players enrolled. He said winning the contest and making improvement to the local rink would benefit the youth.

“It would be a boost for them,” he said.

Ermineskin’s minor hockey association has been around since the 1970s.

“It would be safe to say it’s one of the best minor hockey systems around,” Ermineskin said.

Maskwacis is the only First Nation community to advance to this year’s Top 10 group. Cutarm is hoping word spreads to First Nations across the country and that their members vote for Maskwacis.

“Hockey is huge in Maskwacis,” Cutarm added. “If you go anywhere you’ll see people wearing their own hockey jersey or they’ll be wearing a jersey from an NHL team.”

The eastern Ontario finalists include two Ontario communities, Collingwood and Cobden. The others are Quebec’s Saint-Ambroise, Bay Roberts in Newfoundland and O’Leary in Prince Edward Island.