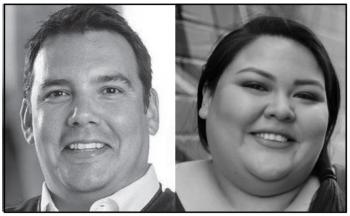 Niigaan Sinclair, an assistant professor in Native Studies at the University of Manitoba, and Courtney Skye, research fellow with the Indigenous think-tank the Yellowhead Institute.

“In that environment the fact is that it is very difficult to justify voting because if all the parties suck, why would you participate in any of it?” — Niigaan Sinclair
By Shari Narine
Local Journalism Initiative Reporter
Windspeaker.com

To vote or not to vote? That is the question Indigenous people face every federal and provincial election.

On Aug. 31, when the Assembly of First Nations released its five-priority platform for the federal election, National Chief RoseAnne Archibald weighed in. Like her predecessor Perry Bellegarde, Archibald encouraged people to vote.

“First Nations voters can and will make a large impact on the results on election night,” said Archibald.

The Native Women’s Association of Canada launched an aggressive campaign entitled “We’re done asking, we’re voting,” which aims to “activate Indigenous women from coast to coast to coast to get to the polls and have their voices heard,” said the news release.

Both the Manitoba Metis Federation and the Métis Nation of Ontario are encouraging “all of our citizens” to vote.

Despite these pushes by Indigenous organizations to get people to mark their ballots, Courtney Skye, research fellow with the Indigenous think-tank the Yellowhead Institute, says voting is a “contentious issue.”

“We continue to have a country in which Indigenous peoples are seen as second tier, are seen as lesser than, are deemed as not as important or an option for political parties to decide to deal with at some point. In that environment the fact is that it is very difficult to justify voting because if all the parties suck, why would you participate in any of it?” he said.

Skye also brings attention to the existence of pre-Confederation treaties with the British Crown, including those held by her Haudenosaunee people.

“If we expect the Crown to respect our nationhood and our autonomy over our affairs then we have to extend that back out of mutual respect, and so, for a lot of Indigenous people who consider themselves treaty people and expect the Crown to honour these treaties, then they follow through with that in their own conduct and they don’t vote in elections,” she said.

Skye isn’t as cynical as Sinclair. She says those who choose to vote are often “driven by frustration of the status quo and not necessarily (by) being indoctrinated into another system” and want to have Indigenous voices in the House of Commons.

“Indigenous people make that choice for themselves, informed by their own history, their own treaty agreements, their own view, what riding they’re in, whether or not there’s a (good) candidate in their riding, whether they view their riding as close or not. There’s a lot of different things I think that go into Indigenous people making the choice of whether or not they’re going to vote in the upcoming election,” said Skye.

Skye says it makes sense that the AFN would encourage its members to vote as “the AFN itself is a colonial construct … It’s a representative body of Indian Act band councils. They don’t represent nations; they represent First Nations as creations of the federal government. They are people who are trying to affect change within the system. I get where they’re coming from.”

“Getting out the vote is a standard practise of all national chiefs,” said Sinclair, adding he believes that push goes back as far as Phil Fontaine who served as national chief from 1997 to 2000 and again from 2003 to 2009.

“The AFN has to deal with the federal government and so if there’s a brown face in that government, naturally, they think that will evoke change,” he said.

Skye observes that Inuit have a much different relationship with Canada than do the Haudenosaunee people. That difference became clear with the positive reaction from Inuit organizations when Inuk woman Mary Simon was appointed the new Governor General, the first Indigenous person to hold that position.

In an earlier interview with Windspeaker.com, Aluki Kotierk, president of Nunavut Tunngavik Inc., said that having an Indigenous person representing the Queen was not a conflict, especially an Inuk, as “the experiences that we have had are quite different from First Nations and Métis.”

As for the Métis, Sinclair says they are pleased with Trudeau’s Liberal government. While the Métis do have “longstanding issues … the fact is the Métis have been able to justify many of the policies that the Liberals addressed and they’ve found a very willing dance partner.”

“While we believe that Justin Trudeau’s government has developed the strongest relationship with the Indigenous community in Canadian history, we are willing to work with any party that wins the election,” said Manitoba Metis Federation President David Chartrand in a news release. He also said the Red River Métis would be “actively participating” in the election.

Skye believes the number of Indigenous voters has slowly increased over the years, but she is not counted among those numbers.  Skye has never voted nor will she be this time around.

“For me I make the personal choice to invest in our own communities, participate in our own governance structures and revitalize our traditional systems over leveraging power from the state to affect change,” said Skye.

Sinclair, who is Anishinaabe, has voted in the past although not often. He’s more inclined to vote in provincial elections, he says, because that can influence policies that pertain to his career as a teacher. He is uncertain whether he’ll be voting federally this month.

“Often for me it’s a determination of will my vote matter? Frankly, my vote never matters in the area I’ve lived,” said Sinclair.

The federal election is Sept. 20.