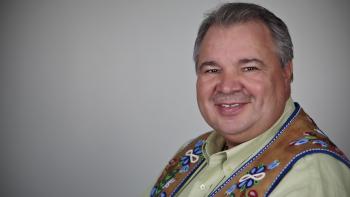 “I’ve been talking about traditional economies and figuring out how to do it for at least 20 years. I’m so proud as a Métis government that we have the resources economically now to do our part.” — Manitoba Metis Federation president David Chartrand
By Shari Narine
Local Journalism Initiative Reporter
Windspeaker.com

Over a year in the planning, the Manitoba Metis Federation (MMF) is taking the next step in revitalizing the Red River culture and way of life.

First it was about the music and getting more than 3,500 kids fiddling and promoting square dancing. Then it was about providing economic support to artisans in the form of grants and purchasing the high-quality products to sell in the MMF store locally, nationally and internationally. Now, it’s about the trappers.

“I have a passion for history and culture and just our nation in general. This is part of the evolution of our nation and we kind of got pushed out of the market many, many moons ago,” said MMF President David Chartrand.

Come spring, the new Red River Métis Fur Company will purchase muskrat and beaver pelts from Métis trappers and pay them an above-market price. As the year goes on, the furs of other animals in season will be purchased.

The Red River Métis Fur Company has committed $1 million to purchasing those furs.

The fur industry for Métis trappers has taken a beating over the years, says Chartrand. Animal rights and environmental activists have campaigned against trapping. Fur farms have grown in numbers. Farmers and ranchers have killed coyotes and other predators to keep their properties clear.

“This has impacted the way we trap and do things,” said Chartrand. “We want to give (the trappers) not only the opportunity to practise something they love to do, their traditions, but to at least give them a chance to make some money. We’ll buy from them and then we’ll worry about selling them.”

Local Métis artisans will get first priority for the furs to create beaver mitts or muskrat hats and other products.

Working with artisans and trappers, points out Chartrand, is about creating microbusinesses. He believes local economies will benefit from small businesses more than any large business.

MMF is also investigating overseas markets for fur sales, with possibilities existing in countries like Turkey, Russia and China.

To ensure the environment and species are protected, a quota-based system will be put in place, which will limit how many animals of each species Métis trappers can take. Chartrand says those numbers will be easy to track, pointing out that trappers will be aware of when their lines are coming up empty in specific fields.

“We always want to make sure the trapper has something to trap and at the same time ensure a balance in the environment,” said Chartrand.

While the MMF’s goal is to give Métis trappers the opportunity to renew their culture and gain economically, if there aren’t enough furs coming in, Chartrand says he will speak to local First Nation trappers, set quotas and purchase their furs.

There will also be grants in place through the MMF for trappers to purchase traps.

Chartrand says the MMF is also looking at “getting the traditional hide back.” He says many artisans would prefer to work with moose, elk or deer hide instead of cow hide. However, the present price for those traditional hides is low.

The MMF is also considering the bead market. Beads are becoming scarce, says Chartrand, and are an important part of the Métis culture. Métis are known as the Flower Beadwork People. The MMF will either consider purchasing a “massive amount of beads” or developing a company that will make their own beads.

“I’ve been talking about traditional economies and figuring out how to do it for at least 20 years. I’m so proud as a Métis government that we have the resources economically now to do our part. To make sure we give a hope to our trappers, a hope to our culture and way of that life, that we do not give it up. That is part of who we are and that will carry on for centuries to come,” said Chartrand.