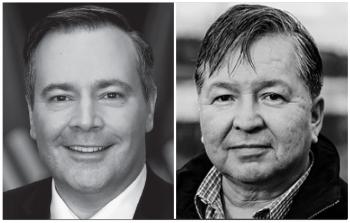 “With development we have limited access to practise our treaty rights, to hunt, fish, gather. That’s our culture. That’s our lifestyle.” — Chief Mel Grandjamb
By Shari Narine
Windspeaker.com Contributor

Far from it, says Grandjamb. It's about responsible development, which lets his people hold on to the last wilderness area that will allow them to continue practicing their treaty rights.

Last week, the First Nation was in the Alberta Court of Appeal fighting a decision by the Alberta Energy Regulator (AER), which in June 2018 gave the go-ahead to the Prosper Petroleum Ltd.-owned Rigel oil sands development.

Fort McKay First Nation was granted the appeal on the basis that AER may have erred in approving the development as negotiations on the Moose Lake area management plan have not concluded.

At the heart of that management plan is a 10-kilometre buffer zone around Moose Lake. Discussions have been ongoing between Fort McKay Nation and various provincial governments since 2002. Those discussions have led to letters of intent, including one from previous Conservative Premier Jim Prentice. While the majority of the recommendations for the management plan have been accepted by the government, no decision on the buffer zone has been made.

At this point, the Prosper Rigel development puts a central processing facility within that 10-kilometre buffer zone. It’s the location of the facility that is the contentious issue for Fort McKay First Nation.

“With development we have limited access to practise our treaty rights, to hunt, fish, gather. That’s our culture. That’s our lifestyle. For us the Moose Lake plan is the last (area). This is all we have left,” he said.

Grandjamb is quick to point out that his First Nation has worked hard over the years developing relationships with the oil and gas industry and growing their own resource-rich economy with the Fort McKay Group of Companies. In 1986, when the group of companies was founded, annual revenues were $6 million. By 2018, those revenues had grown to $500 million.

“Based on our hard work, Fort McKay has elevated itself,” said Grandjamb.

Fort McKay First Nation has invested in infrastructure, “comfortable” homes, and amenities, which include a long-term care facility and a day care. A new $40 million kindergarten to Grade 9 school has just been announced. Programs and services are topped up by the First Nation, which also provides off-reserve assistance for household incomes.

Grandjamb, who attended the National Coalition of Chiefs’ Energy and Natural Resources Summit earlier this week at Tsuut’ina First Nation, says he’s pleased with the strong talk from Alberta and Saskatchewan’s energy ministers.

He says he doesn’t take that push for resource development as a message that the UCP government will walk away from the buffer zone in the Moose Lake management plan. He says a visit from Premier Jason Kenney, who came to Fort McKay First Nation in September, has left him “very optimistic.”

“(Kenney) seems positive. He talks about consultation with Aboriginals, talks about getting Albertans back to work. We have a good fit there,” said Grandjamb, who adds he has also received favourable response from Indigenous Relations Minister Rick Wilson.

A spokesperson for Wilson confirmed that the minister told Grandjamb he would look at the Moose Lake plan.

“The government recognizes the importance of protecting Indigenous Peoples’ traditional lands, including the area around Moose Lake that is integral to the Fort McKay First Nation. Sustainable resource development is vital to the region and government is committed to balancing industry interests and input with economic, conservation and treaty uses. It is our desire to continue to engage with the Fort McKay First Nation and other Indigenous organizations on the Moose Lake Management Plan,” said Wilson’s office in an email statement.

However, despite the “good working relationship” with the Alberta government, Grandjamb says the court action was pursued partially because it had already gotten underway well before meeting with Kenney, and also because it’s another avenue for Fort McKay First Nation to take to get the buffer zone.

If they are unsuccessful, Grandjamb says further action, including applying for a leave to appeal to the Supreme Court of Canada, will be considered. He says direction will be taken from the membership.

This past June, the Supreme Court dismissed an application from the Fort McKay Metis Community Association to be heard on the Rigel project. In January, Fort McKay Metis was turned down for a hearing by the Alberta Court of Appeal. The McKay Metis argued that the AER’s decision would harm Metis Sect. 35 constitutional rights. The appeal court rejected the argument saying fear of harm did not qualify as actual impact on Aboriginal rights to harvest.

If Fort McKay First Nation needs to take further legal action, Grandjamb says he is not concerned that under a new litigation fund set up by the province, the nation would not qualify for dollars because their fight is aimed at an oil sands project.

When a decision will come from the Alberta Court of Appeal is unknown. In the meantime, Fort McKay First Nation is going ahead with a Moose Lake Together Summit in the new year.

“We’re hoping that Mr. Kenney and his cabinet will come to our summit in good faith and after a comprehensive review … we execute the (Moose Lake management plan) document with the inclusion of the 10-kilometre buffer,” said Grandjamb.

Leading up to that summit, the Fort McKay First Nation is undergoing a media campaign reaching out to Albertans and Canadians to let them know the nation’s position.

“Look Canada, look Alberta. We worked with you for 30 years, for 40 years. We’re not anti-development. We want to say that Fort McKay, industry and government, we get to the table and we ensure that the development in this 10-kilometre zone has merit and (there’s) got to be some assurances that it will protect the wilderness,” said Grandjamb.

He adds that having to remind the public and the governments about treaty rights is “very frustrating. At the end of the day, it’s something that our peoples have fought for hundreds of years and to this day and age, in 2019, we’re still fighting for it.”