LISTEN: Minister admits province should have talked with Nechi Institute before eviction notice 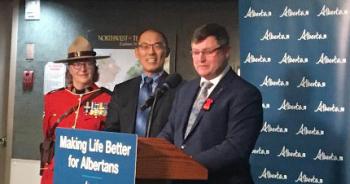 “We’re actually going to put over about a million-and-a-half into Poundmaker’s…. Double the number of addiction beds there. This is amazing… This is life saving stuff.”

He said an additional 900 people over the next three years will be able to go through treatment at the centre.

“This is so exciting. There was a little bit of misinformation there, but this is probably, honestly, one of the best things I think we’ve done,” Wilson told Jeremy Harpe, morning host on Windspeaker Radio.

The minister said he had some good friends that have received treatment at Poundmaker’s—leaders in the community—that “probably wouldn’t be here otherwise.”

The misinformation Wilson was referring to relates to the Nechi Institute, which occupies space in the same building as Poundmaker’s, to train therapists and addictions counsellors.

Prior to the Poundmaker’s funding announcement, the institute’s CEO, Marilyn Buffalo, released a letter stating that Nechi had been sent an eviction notice from the province. Nechi was out in order to make room for Poundmaker’s new treatment beds. This despite Alberta having gifted the building to both Nechi and Poundmaker’s in 1984.

“We didn’t communicate properly to be honest with you,” said Wilson when asked about Buffalo’s letter. “We should have gone and talked to them ahead of time. It got out ahead of our… too many cooks in the kitchen.”

Wilson promised Nechi was not going to be shut down. “We want to work with them to find them another spot. It’s just that they were using spots, clinical spots, where we can actually put beds to put people in. They just really need office space. So we’re going to work with them to find them some office space and where they can continue their training.”

The institute’s physical capacity includes about 25 beds for students, office space and a training centre. In an interview with Windspeaker.com earlier this week, Buffalo was concerned about where Nechi’s training would take place and where students would sleep when they attended the institute to train.

“Now what are we going to do? We’re going to become homeless,” she said.

As for the gift provided Poundmaker’s and Nechi 35 years ago, Wilson pulled back on that assertion.