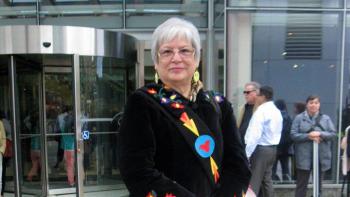 “There’s a whole lot of history in that sacred space there in the terms of the relationship.” —Marilyn Buffalo
By Shari Narine
Windspeaker.com Contributor

“For us to get an eviction notice is a complete violation of treaty,” Buffalo told Singh and chiefs at the Assembly of First Nations Special Chiefs Assembly in Ottawa on Tuesday.

“Our treaty right to the medicine chest. Our treaty right also includes mental health services and treatment for addictions. We are the experts in this field and we’re not going down quietly.”

The Nechi Institute is a privately funded organization that has been training therapists and addictions counsellors from First Nations since 1974. In 1984, it moved into the former Edmonton residential school on the outskirts of St. Albert, as did the Poundmaker’s Lodge Treatment Centre.

The province is saying it needs the space Nechi occupies in order to expand the services offered by Poundmaker’s.

Buffalo counters that the province should be opening treatment centres in First Nation communities to address the addictions crisis.

“We have to figure out a way to help you right away,” said Singh

“It’s important work that you’re providing. Treatment and mental health services are absolutely a part of health and they cannot be separated, and in fact need to be enhanced,” he said and promised to work with Buffalo to meet her “urgent” need.

“This approach your Nechi Institute is taking is exactly the type of approach we need to have more of and not less of.”

Ted Bauer, spokesperson for Alberta Indigenous Relations, says Nechi’s eviction is part of a tri-ministry effort, which includes Health and Infrastructure, to address the growing need of the  Indigenous people in the province.

“We’re working on the premise to create bed space because Indigenous people are disproportionately represented in addiction facilities. They die at four times the rate more than non-Indigenous so that’s our involvement,” said Bauer.

“We believe this robust change will increase detoxification and treatment bed access and create a rapid response scenario,” said Poundmaker’s in a news release issued Tuesday. The new space will allow Poundmaker’s to increase its treatment bed capacity to 100.

In 2019-2020, Poundmaker’s received $3.1 million from Alberta Health Services, representing 68 per cent of the treatment centre’s funding.

The official announcement for the new addiction treatment beds will come Wednesday from Poundmaker’s. According to the province these beds are the next step in the government’s commitment to create 4,000 publicly-funded treatment spaces.

Bauer points out that Nechi hasn’t “paid a dollar for rent for decades.”

Buffalo says that’s because the building was “gifted” to Nechi and Poundmaker’s in 1984 by the province.

“There’s a whole lot of history in that sacred space there in the terms of the relationship,” she said.

Bauer says he has no information on the building having been gifted.

The province is open to working with Nechi to see if they can find additional space for another location, as well as reviewing any funding requests the institute may make, says Bauer. He adds that Nechi has not approached the government so far.

Over its years of operation, Buffalo says Nechi has trained 40,000 people from right across the country. The institute has a unique approach to its training, providing an Indigenous perspective with spiritual grounding and traditional knowledge. Presently the institute’s physical capacity includes about 25 beds for students, office space and a training centre.