Keystone XL will not have an easy ride, promises Indigenous spokesperson 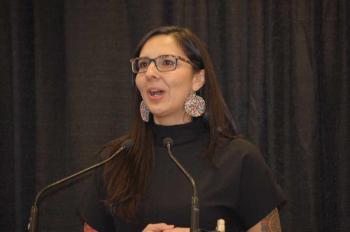 Eriel Deranger joined a panel discussion with Jane Fonda in Edmonton earlier this to talk out against tarsands development. (Photo: Shari Narine)

Eriel Deranger expects that the protests that rocked Washington over a three-year period until Obama said no to the Keystone XL pipeline will now surface in Canada as the project received approval this morning from the new Trump administration.

While TransCanada’s proposed pipeline does not run through ACFN territory, the oil does come from ACFN land.

Deranger said she was not surprised that Keystone XL got the Trump nod – which had been a campaign promise – but she is surprised it came only four days into his term.

She says his quick approval of pipeline projects is an indication that he neither respects the rights of Indigenous peoples, which are defined and affirmed through treaty and international documents such as the United Nations Declaration on the Rights of Indigenous Peoples, nor does he have regard for climate science.

The defeat of the Keystone XL pipeline project had been upheld by Indigenous leaders as an indication of what a collective voice could accomplish.

Deranger believes that the turn in events does not mean that the concentrated effort was not a success. She points out the project was supposed to have been accomplished years ago.

“(Trump) may have signed an executive order to support the construction of these (pipelines), but there’s no final permits in place, there’s still going to be opposition … and the people are still going to continue to stand up. Just because it’s reopened doesn’t mean it’s a done deal,” she said.
Many First Nations in both Canada and the U.S. have signed on to a continent-wide treaty to oppose the development of five pipelines, including Keystone XL, as it was feared it would be resurrected should Trump win the November 2016 election.

Both Trudeau and Alberta Premier Rachel Notley quickly expressed their support of Trump’s decision this morning.

“Our government welcomes news that the United States has taken important steps toward moving forward with Keystone XL pipeline,” said Notley. “This project is going to create good jobs here in Alberta and that’s my focus.”

She said the resurrection of Keystone XL would not impact the carbon emission cap as it did not change the amount of oil produced, but simply the means of transportation.
Notley also said the province will continue to work towards building Canadian pipelines to Canadian tidewater so as not to depend economically on the U.S.

But as far as Deranger is concerned further fossil fuel development is not the way to address the issues.

“We can be developing new jobs and new energy economies in the province that can meet and beat things like Keystone XL and the expansion Alberta oil sands are offering and are in line with international climate commitments. That’s the way we should be going. Ways that respect Indigenous people’s rights, address the climate crisis, address the economic crisis, the jobs crises and makes Canada come out on top,” she said.

Keystone XL is a 1,897 km pipeline running from the oil sands to Nebraska, where it would join an existing pipe. It could carry 830,000 barrels of oil each day.