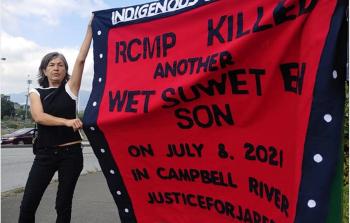 Alunae Laura Holland, Jared Lowndes’ mother. He was killed in July 2021 by RCMP. Photo by Laura Linklater. Second photo is from the day of the shooting in the Tim Horton's parking lot in Campbell River, B.C. Photo by Odette Auger.

“We got the first part of justice for Jared today. My thoughts are with all the families who have not made it here yet. This is for all the Jareds.” — Jared Lowndes’ mother, Alunae Laura Holland
By Odette Auger
Local Journalism Initiative Reporter
Windspeaker.com 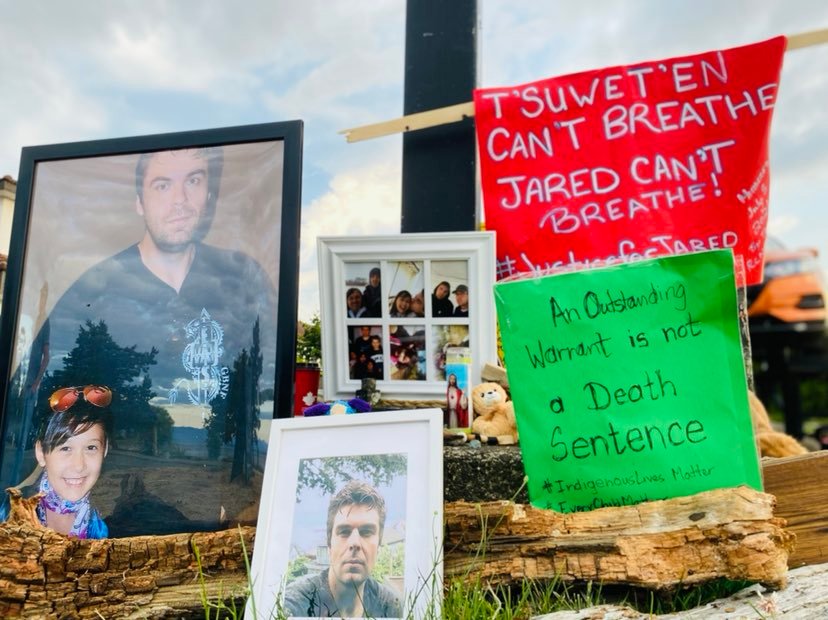 Upon completion of the investigation, Chief Civilian Director Ronald J. MacDonald, KC, determined that reasonable grounds exist to believe that three officers may have committed offences in relation to various uses of force.

The IIO says it will send a report to the BC Prosecution Service for consideration of charges.

On the actions of the fourth officer, the IIO is undecided. Investigators are waiting for more information, which is expected early in the new year.

No further details will be released by the IIO to avoid impacting any trial. The Crown may decide to release more information at its discretion.

Just before 5:30 a.m. on July 8, 2021, an officer attempted to check a parked dark blue Audi. When the Audi drove away, there was contact between the Audi and police vehicle. The officer did not pursue but advised other officers of the incident, reads a statement from the IIO.

At about 9 a.m., police again located the Audi. Officers stopped the vehicle in the drive-through of a business in the 2000-block of South Island Highway. During the interaction that followed, one officer put a police dog in the car and shots were fired into the vehicle by police. A man was subsequently pronounced deceased.

The IIO confirms Lowndes was killed by the bullets from the gun of a police officer.

The night before the release of the IIO findings, she spoke with Windspeaker.com about her hopes and fears.

“Now I can only hope for the police to be held criminally responsible for his death,” she said.

“I’ve been keeping my mind settled.” She said her hands are kept busy by re-learning how to bead. She’s been working on a mourning blanket.

“I’m just hopeful the news from the IIO is not around police negligence with the dog. And then they hand that over to Crown, who eventually drops it. That’s my nightmare,” she said.

But the information that came from the IIO was not what she feared.

“We got the first part of justice for Jared today, she told Windspeaker.com. “My thoughts are with all the families who have not made it here yet. This is for all the Jareds.”

There have been 74 reported incidents of in-custody deaths in B.C. alone, and that’s just in the 16 months since Lowndes’ death, reports the Pivot Legal Society.

Pivot said that “Continued systemic racism in policing, including racial profiling and dangerous stereotypes, leads to disturbing rates of death and injury of Indigenous people in police custody.”

Pivot calls for police and oversight agencies to acknowledge this crisis, and calls for law and policy-makers to take action.

A group that was started after Lowndes death, called Justice for Jared, demands police should always have their body cameras on and calls for an end to the use of police dogs. It also calls for the reform of the IIO, including asking for Indigenous oversight and investigators, and removing ex-police from the IIO to make it a truly independent investigative office.

“Too many Indigenous people are shot and killed by the RCMP and other police forces across this country,” said Phillip at a live-streamed media advisory after the IIO announcement.

“The IIO, in my view, has failed to live up to their mandate to hold police accountable.” After speaking, he led gatherers in a chant, “No more dead Indians.”