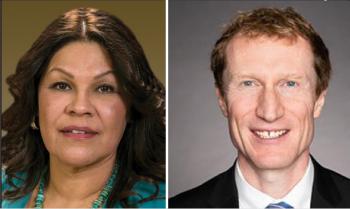 “If there’s need for more, that number ($305 million), based on the situation, can increase as well. Because we have to remember, it’s not only for First Nations, it’s also for Metis and Inuit.” — Alberta Regional Chief Marlene Poitras
By Shari Narine
Windspeaker.com Contributor

But until a formula is developed – which will include population, need and remoteness – he said regional offices are deploying “modest emergency funds that we had to address even more immediate needs.”

“We’re here to address the vulnerabilities in Indigenous communities and recognize we can only do this in close collaboration with Indigenous leadership across this country,” said Miller.

“When we look at the priority groups, Indigenous communities or people experiencing an illness or outbreak are actually in the priority list of discussion,” said Canada’s Chief Public Health Officer Dr. Theresa Tam.

Miller joined Tam and Deputy Prime Minister Chrystia Freeland  for today’s briefing from members of the Cabinet COVID-19 committee. Miller is not a member of that committee.

Money was set aside in the Indigenous Community Support Fund as part of Canada’s COVID-19 Economic Response Plan, which will provide up to $27 billion in direct support to Canadian workers and businesses. The announcement was made by Prime Minister Justin Trudeau on March 18.

That money will be used to address “surge capacity,” said Miller, who pointed out that both the first and second waves of H1N1 in 2009 disproportionately hit Indigenous communities.

Dr. Tom Wong, chief medical officer of public health, ISC, said there is a team dedicated to surge capacity, which includes stocking supplies, to ensure that “not one single First Nations, Metis or Inuit (community) … are left behind.”

“We want to support them together with our partners, the provinces and territories, to run faster than the virus,” said Wong.

Miller directed Indigenous communities to coordinate and discuss their needs with their primary health providers, which are provinces and territories. In British Columbia that responsibility lies with the First Nations Health Authority.

Screening and testing will also be carried out by the provincial and territorial governments.

The needs identified by the Indigenous communities are to be addressed through epidemic or pandemic plans. Miller said 87 per cent of First Nations have reported they have plans and ISC will be working with them to update those plans.

Miller didn’t tie the need for pandemic plans to accessing the $305 million fund. However, Assembly of First Nations Alberta Regional Chief Marlene Poitras told Windspeaker.com that the pandemic plans were a requirement.

“Many (First Nations) have already developed pandemic plans and have implemented them. So (the new fund) is all geared to whatever the community’s needs are,” said Poitras in an interview prior to Miller’s press conference.

If First Nations don’t have a plan in place, she said, it is largely due to lack of financial and human resources to make that happen.

To that end, said Poitras, First Nations in Alberta are using template plans sent to them by ISC and working with representatives from the First Nations and Inuit Health Branch and ISC’s regional director in Alberta to make that happen.

Miller did say that funding was not tied to First Nations declaring states of emergency.

A number of individual First Nations, as well as provincial and regional First Nations organizations across the country, have declared states of emergency for a variety of reasons, including as precautionary measures, ensuring capacity and planning are in place internally, opening stronger channels of communication with their members, and in anticipation of other pending emergencies, including spring flooding.

Miller said he has directed his department to “deploy that money out as quickly as possible into communities.”

Poitras said she believes the $305 million pot could increase.

“From what I understand that number is not a static number. If there’s need for more, that number, based on the situation, can increase as well. Because we have to remember it’s not only for First Nations, it’s also for Metis and Inuit,” she said.