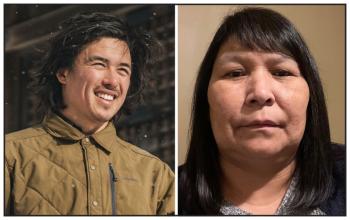 “I’m so grateful for our film to be the opening film. It means so much to our people and our Elders. There were so many people who stood beside us and guided us to a successful outcome. — John Nole, one of the Klabona Keepers
By Adam Laskaris
Local Journalism Initiative Reporter
Windspeaker.com

A new film titled Klabona Keepers, which documents a decades-long matriarch-led resistance of industrial activities in northwest British Columbia, is set to premiere in Toronto later this month.

The film showcases one community’s efforts to protect remote headwaters located in the Klappan highland, a traditional Tahltan hunting area known as the Klabona.

The Klabona consists of four salmon-bearing river systems. The community pushed back against mining and energy companies that looked to set up shop in the territory. The festival describes the film as “an intimate portrait of the dynamic Indigenous community that succeeded in protecting the remote Sacred Headwaters.”

Klabona Keepers is directed by Tamo Campos and Jasper Snow-Rosen. It was produced by Rhoda Quock, who is one of the original Klabona Keepers. The filmmakers will travel to Toronto for a Q&A period following the in-person screening.

“The community has had such a huge role in inspiring my life and what's possible,” said Campos in an interview with Windspeaker.com.

“I'm just hoping that it's inspired people to do the same for a place that's valuable to their people. And to let them know (that) no fight is too big,” Quock said.

“When we first started, there was no light at the end of the tunnel. We didn't know how we were going to win, but we knew we weren't going to lose.”

Campos, an activist and professional snowboarder originally from North Vancouver, said he was introduced to the Klabona Keepers’ cause nearly a decade ago while filming an unrelated project nearby. Noticing a sign for the Headwaters Music Fest, Campos planned a few days in the area and learned the backstory of the Klabona Keepers.

“Seven-and-a-half weeks later, we were still absolutely being blown away by the resolve to protect that area,” Campos said.

The film concludes with the introduction of the 2017 Klappan plan, a joint venture of the BC government and Tahltan Central Government, which outlines the “long-term management and land use direction” in Tahltan territory.

“We want a permanent protection on Klappan for the future generation,” Quock sad.

The film will screen Thursday, May 26 at 7:30 p.m. at the Hot Docs Ted Rogers Cinema in Toronto, and will stream across Canada as part of the festival from May 30 to June 2.

Tickets are free for both the digital and in-person options, but must be reserved in advance here: https://hotdocs.ca/whats-on/cinema-series/hrw-film-festival

“I’m so grateful for our film to be the opening film,” said John Nole, one of the Klabona Keepers. “It means so much to our people and our Elders. There were so many people who stood beside us and guided us to a successful outcome. Creator, rest the souls of some who have left us to continue the fight that they started for the Klabona. Our ancestors continue to share their wisdom from the spirit world and guide us.”

Campos said the filmmaking team wanted to offer the film as a gift to the local community as a way to repay “how much they shaped our lives”, adding that the team plans to make the film available to Indigenous communities across the country to screen after the festival release.

“We knew that we came into the story long after everything had started in the fight for the Klappan,” Campos said. “It just felt very fitting [to debut it at this festival] because it's a human rights issue to protect the Klappan. It's an Indigenous rights issue. And so it felt thematically very important to tie into this festival and the work that Human Rights Watch does for human rights violations and issues around the world.”

“The efforts of the Klabona Keepers and Elders to protect the sacred headwaters is commendable and we look forward to celebrating their achievements on opening night,” said Uttley.

“Klabona Keepers kicks off a lineup of films that spotlight courage and serve as an inspiration for how we can all do our part to stand up to injustice.”