Indigenous journalists essential in amplifying the stories of Indigenous people 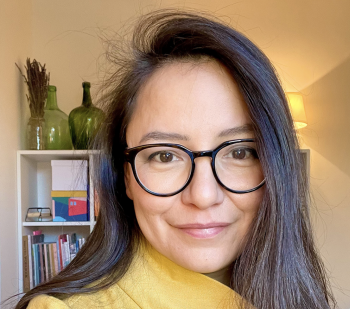 Connie Walker spoke on the subject of “Journalism’s Role in Reconciliation” during the Indigenous Speakers Series at Vancouver Island University on Nov. 22.

“Marie Wilson said it’s our job as journalists to connect the dots, to provide that context, to help people understand a part of our shared history that we weren’t taught in schools.” — journalist Connie Walker
By Shari Narine
Local Journalism Initiative Reporter
Windspeaker.com

It was the final days of the Truth and Reconciliation Commission’s mandate in 2015, and then the subsequent tabling of the commission's Calls to Action to address the legacy of Indian residential schools that made Indigenous journalist Connie Walker understand the “growing awareness and appetite in mainstream media for Indigenous issues.”

The coverage of the TRC’s final event in Ottawa in May and June 2015 led the national news for five consecutive nights, and the day the commission issued its final report on Dec. 15, the first 15 minutes of CBC’s The National was TRC coverage.

About a year later, Walker attended a journalism conference organized by three Indigenous journalists. It was shortly after Cree Red Pheasant First Nation member Colten Boushie was shot and killed by a farmer in rural Saskatchewan.

A statement made by former journalist and former TRC commissioner Marie Wilson at that conference “changed the way I do my job, changed the way I report on all Indigenous issues,” said Walker.

Wilson said ‘put everything in context’.

“Marie Wilson said it’s our job as journalists to connect the dots, to provide that context, to help people understand a part of our shared history that we weren’t taught in schools. A part of our history that has often been ignored or misunderstood by media,” said Walker.

That piece of advice made Walker understand that stories about Indigenous people begin well before any incident occurs; before a person was even born. Stories are connected to family histories, to the Sixties Scoop, to Indian residential schools, to the Indian Act, to colonization.

Today, intergenerational trauma often shows up in the context of the Indigenous stories that are told, Walker said.

Considering the impact the TRC and its commissioners have had on Walker’s career, it was only fitting that she got to speak on “Journalism’s Role in Reconciliation” for a TRC-inspired event. On Nov. 22, Walker addressed more than 200 people live and virtually as part of the Indigenous Speakers Series. Vancouver Island University initiated the annual event seven years ago in response to the TRC’s Calls to Action aimed at transforming post-secondary institutions.

Walker counts herself among those, but she stresses it hasn’t been an easy journey.

Walker was drawn to the profession in Grade 12 when Pamela George, a young Indigenous mother, was brutally murdered in 1995. Media coverage focused on the two middle-class young white men, both star athletes, who had committed the crime. George was referenced primarily as a sex worker.

The incongruity of the coverage was something of which Walker became “keenly aware”. It sparked her desire to become a journalist who could create empathy for George and not simply dismiss her. About four years later, the two men, who were acquitted of George’s murder but convicted of manslaughter, were out of jail.

By this time Walker was a journalist intern and “hopeful about the impact that I could have.”

But as the sole Indigenous voice in the newsroom, she realized it wasn’t enough. She didn’t have the power to speak to racist stereotypes nor the power to pitch Indigenous issues for news coverage.

In 2005, the Native Women’s Association of Canada released a report that estimated some 500 Indigenous women were missing or had been murdered. Walker recalls most of her colleagues “scoffed” at the number, questioning its validity because there had been no coverage of the violence Indigenous women faced.

“Journalists, for the most part, had been ignorant about the truths their entire careers. They couldn’t understand or fathom it because they didn’t understand what I or other Indigenous journalists knew because we had direct experience with that violence,” said Walker.

Ten years later, Walker was part of a unit at CBC News dedicated to telling stories about murdered and missing Indigenous women and girls. Every national news media was doing similar work.

Walker credits this swing in media focus over that 10-year span to three factors: more Indigenous journalists in the newsroom; the shift to digital media; and the work of the TRC.

Social media, she says, provided an unexpected opportunity to engage with the Indigenous population. CBC dedicated digital space to Indigenous stories. That digital space and the work of Indigenous journalists has grown.

“Our success, I believe, was largely due to the connections that we, as Indigenous journalists, were bringing directly from our communities, that the perspectives that we were offering were different than the status quo, and that it was a much needed and refreshing change,” she said.

Metrics proved that there was an audience for Indigenous stories. The digital platform provided a sharp contrast to traditional platforms like television and radio, which saw mostly white editorial leaders assigning stories, choosing line-ups and deciding where Canadians’ interests lay.

The strength of digital media saw Walker’s 2018 Missing & Murdered: Finding Cleo win the inaugural Best Serialized Story award at the Third Coast International Audio Festival and named one of the Best Podcasts of 2018 by Apple Canada. In 2017, Missing & Murdered: Who killed Alberta Williams? won the Radio Television Digital News Association’s Adrienne Clarkson Award and was nominated for a Webby Award.

It was also digital media that set Walker on her latest journey after discovering a Facebook post by her brother that spoke to an incident in their father’s past that was connected to his attendance at St. Michael’s Indian Residential School. The focus of her next season of Stolen is her father’s experience.

“As dramatic as the shift has been these last eight years, the last six months have been even more monumental. As one Elder told me, ‘The discovery of the unmarked graves of children at the Kamloops Indian residential school woke up the world’,” said Walker.

Walker’s personal awakening came a week after the news broke about the remains of 215 children at the former Kamloops school site. That was when she was scrolling through Facebook and found her younger brother’s post.

He recounted the story of their father, an RCMP officer, stopping a driver he suspected of drinking. He recognized the driver as the priest who abused him at residential school. He beat the priest on the side of the road that night. He expected his career to end or to be charged, but no complaint was ever laid.

Walker has spent the past few months investigating her father’s experience at St. Michael’s. Since he passed away in 2013, she’s been talking to his family. She is also in search of the priest from the traffic stop.

Learning about her father’s experience has reminded Walker of what she’s learned throughout her entire career. It’s important for Indigenous journalists to be leading this work and to be supported, resourced and empowered, she says. That is one more step along the road to reconciliation.

“It's not only important for journalists to uncover the truth, but just who gets to tell the stories is equally important. Who do we need to take this work on? Who can help us amplify the right voices and understand the context?

“Indigenous journalists … bring with us a unique set of lived experiences and perspectives that are crucial for understanding the realities that Indigenous people live in Canada and how that connects back to aspects of our shared history that Canadians are just beginning to understand,” said Walker.

Over the past few years, Walker has seen more Indigenous journalists and admits she’s “in awe” of the younger ones who have no qualms in calling out the establishment when they view something as wrong or unfair.

However, the newsroom remains a struggle. Too many Indigenous journalists have left over the past few years, she says, because of racism in the workplace.

“It’s an incredibly challenging space to be sometimes. Having to confront that kind of racism in your work environment is demoralizing and degrading,” she said.

Walker does add, though, that the increased number of Indigenous journalists allows them to support each other.