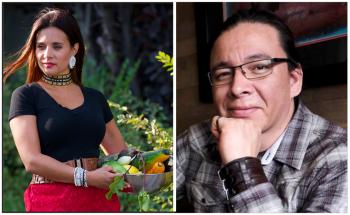 A new initiative will not only provide much-needed business for some Indigenous chefs across the country, it will also enable Indigenous families in need to receive some food this holiday season.

ICAN has enlisted the services of nine Indigenous chefs or restaurants across Canada. The plan is to have chefs provide both the food and recipes for each feast box, valued at $50 per box.

ICAN is spending $25,000 of its own money to pay for the chefs’ and workers’ time, as well as some distribution expenses.

Each box is expected to serve four to six people. The food will either be partially or fully prepared, and will come with cooking instructions.

Various organizations would then distribute the boxes of food to Indigenous families in need.

“This initiative is something we need right now,” said Joseph Shawana, the chair of ICAN’s board of directors. “This is the time we need to come together and help each other out. This experience will make us stronger.”

If the campaign reaches its targeted goal, a total of 1,200 boxed meals will be distributed across the country.

Shawana has operated Kukum Kitchen, a popular Indigenous fine dining restaurant in Toronto, since 2016. He realizes there is a huge need for food among Indigenous people across the country, even more so now during the COVID-19 pandemic.

“There is a huge food insecurity on reserve and off reserve,” said Shawana, a member of Wiikwemkoong Unceded Territory on Manitoulin Island. “By us doing this little initiative, we add a few more drops to the bucket.”

Because of the pandemic, Kukum Kitchen has been closed since this past March. Shawana is hoping to reopen the restaurant this coming spring.

He will be taking part in the Indigenous Feast Boxes campaign through his catering service called ddcx Indigenous Kitchen and Catering.

Some representatives from Toronto’s Centennial College will be assisting him. Besides teaching at the college, Shawana is also Centennial’s Indigenous culinary advisor.

As of Wednesday afternoon, a bit more than $8,800 had been raised through the GoFundMe campaign, which can be viewed here.

How much money is raised will determine how many boxes each of the participating chefs will be preparing.

Shawana is hoping ICAN members will continue to provide boxed meals for those in need even after this year’s holiday season.

“I foresee it happening quarterly or every four months,” he said. “I wish we could do it every single week but the funding is not there. You need money to operate this kind of operation.”

Shawana said he has had some preliminary discussions with various organizations that he is hoping will provide some funds to continue a food program into next year.

Christa Bruneau-Guenther, a member of Peguis First Nation in Manitoba, is another chef participating in the campaign.

This month marks the fifth-year anniversary that Bruneau-Guenther has been operating Feast Café Bistro in Winnipeg.

But the pandemic has taken a toll on the business, which originally shut down in March. Since then the business has not been able to provide a good chunk of its catering services or its dine-in options.

Providing the Indigenous Feast Boxes will enable Bruneau-Guenther to do a bit of business.

Bruneau-Guenther is pleased to know that as many as 1,200 families could be receiving feast boxes through this campaign.

A pair of Vancouver restaurants are also among those taking part in the campaign. They are Mr. Bannock Indigenous Cuisine, led by chef Paul Natrall, and a team from Salmon ‘n Bannock Restaurant, including owner Inez Cook.