Indian Hospital in Edmonton being searched for remains 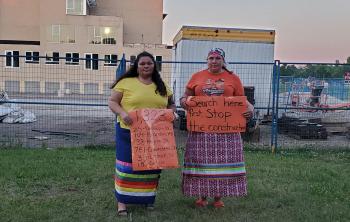 “I know there are spirits there. I know they want to be free.” — Lorelei Morin Mullings
By Shari Narine
Local Journalism Initiative Reporter
Windspeaker.com

“Our hearts were heavy,” say Andrea Jenkins and Lorelei Morin Mullings about why they decided to take a stand last week at the former Charles Camsell Hospital site in northwest Edmonton.

The two close friends spoke on June 25. It was one day after the announcement of the location of 751 unmarked graves on the grounds of the former residential school on Cowessess First Nation. Just that week, the Alberta government had announced $8 million for work to locate burial sites on the grounds of the Indian residential schools in the province.

The women had heard stories from their Elders and others who had been at the hospital about graves dug on the grounds of the Camsell when it served as an Indian hospital. They were told about bodies burned in the incinerator in the basement and they wanted people to know about that.

So Jenkins, Métis/Dene from the Northwest Territories, and Mullings, from the Enoch Cree Nation, decided they would raise their voices and bring awareness by standing at the site, which is now being developed for multi-family residences.

Their occupation was only supposed to last for the evening of June 25, but when 18 or 19 people joined them the first day, and then it swelled to 35 people, including Treaty 8 Grand Chief Arthur Noskey, who stopped by a few days later with water and food, Mullings said they decided they would extend their evening stays until July 1.

Mullings says she’ll be marking Canada Day with an orange shirt at the Camsell site.

Jenkins and Mullings want people to know the sordid history of the Camsell.

“It’s just mind blowing to me that so many people to this day have no idea what has happened there,” said Jenkins.

The site in the Inglewood neighbourhood first housed a Jesuit College before being leased to the American military. Shortly after, the Royal Canadian Army Medical Corp took it over as a military hospital for veterans.

It became the Indian Hospital in 1945, operating in that capacity until 1979. It served primarily as a tuberculosis sanatorium, bringing Indigenous patients from western provinces, the western Arctic and the sub-Arctic.

In Dr. Samir Shaheen-Hussain’s book A Hand to Hold, Shaheen-Hussain recounts incidents and treatments reported to have happened at the Camsell: children’s legs were put in casts to force them to remain in their beds; new tuberculosis treatments were tested on patients; children were sexually abused and assaulted by staff; there were suspicions that Indigenous peoples were being experimented on with medical procedures and treatments; and there was forced sterilization of women.

In her book entitled Separate Beds: A History of Indian Hospitals in Canada, 1920s-1980s, Maureen Lux writes that dormitory-style wards at the hospital allowed for cross-infection and that the University of Alberta Hospital and medical school used Camsell patients as subjects for studies. The patients were not in a social position to formally question their medical treatment.

“I know there are spirits there. I know they want to be free,” said Mullings. “We all feel it.”

All of this, say Jenkins and Mullings, is why the Camsell site should be left alone. Both women have signed an online petition calling to “Stop the redevelopment of the Charles Camsell hospital.”

As of the morning of June 30, the petition, which has been online for seven months, had 394 signatures.

Petitioner Trinity Brandon-Demeuse is calling for the hospital to become a commemorative site.

Gene Dub, architect and developer of the site, says he is unaware of the petition. He also says that as work has already begun in the former hospital to turn it into condominiums it would be unsafe for a half-constructed building to remain standing.

Last week, Dub hired personnel to undertake ground penetrating radar (GPR) scans of the southeast portion of the Camsell site where no excavation work has taken place. The methodology for the scanning went through Dr. Kisha Supernant, who is the director of the Institute of Prairie and Indigenous Archeology with the University of Alberta, says Dub, and he is anticipating the results later this week or mid-next week.

The scans come well into the development of the project, which involves the hospital being converted into housing; 20 townhouses built to the north of the hospital and a seniors project to the south. Land to the west has been zoned for an apartment, but there are no plans at this time to build that apartment.

A group of developers, of which Dub remains the only original member, purchased the land from the province in 2004.

“At that time there wasn't nearly as much interest or concern about burial grounds. I think now we're sort of shocked into finding we should investigate this more seriously,” said Dub.

The decision to undertake the GPR was based on both the discovery of the remains of 215 children at the former Kamloops residential school and concerns voiced by Calvin Bruneau, chief of the Papaschase band in Edmonton.

According to Bruneau, says Dub, as there are no existing buildings at the southeast corner of the site that could be a burial location.

In 2016, Dub says they worked with the city archivist, who told him there were no records of burials on the Camsell site.

“We have been counting on his opinion, but when we heard about Kamloops, we thought maybe we should be looking beyond that opinion,” said Dub.

The southeast part of the Camsell site is slated for a subdivision of eight single family dwellings and a one-acre park. The park is to include “some kind of commemorative identification of people who felt the Charles Camsell was an influence in their life,” said Dub.

“Certainly if anything was found in the way of burials, certainly we wouldn't be building single family dwellings there. We would be perhaps turning that into some kind of memorial area …. If the various Indigenous groups that might have been involved would want to explore it further, they could excavate to see if there are in fact bones there, but we wouldn't be doing anything if we found any bones,” said Dub.

If it is a burial site, Dub is unclear as to who would then own the land. He anticipates he would lose the money he spent on purchasing that parcel, but “it's certainly not the biggest issue, I think.”

Dub says a five-inch bone fragment alleged to have been found on the site was brought to his office about a month ago. He says it was unclear whether it was an animal or human bone and whether it was old or recent. It has been turned over to the Edmonton Police Service for a forensic investigation. Dub says he has yet to hear back from the police

The final report from the Truth and Reconciliation Commission, which came in 2015, included an entire volume on “Missing Children and Unmarked Graves.” It states that Protestant patients who died at the Charles Camsell, whose families couldn’t afford to have the bodies shipped home to their communities, were buried at the cemetery on the Edmonton residential school property.

Research undertaken by Travis Gladue-Beauregard, whose great grandfather died at the Charles Camsell in the late 1960s, also shows that burials occurred in the Winterburn cemetery on the Enoch Cree Nation.

Maxime Beauregard served as chief of Bigstone Cree Nation from 1947 to 1962. Gladue-Beauregard says he always wondered why his great grandfather wasn’t buried on the nation.

When he started asking questions a few years ago, he found out that Maxime had died at the Camsell.

“It was back then, the way the government was, the way Indian Affairs was, they didn’t have a lot of roads (or) infrastructure to haul bodies back home and I know that affected my family…. No one from the family, from my understanding, was actually there (when he was buried) or no one from the nation so I don’t even know if he got even a Christian burial or a traditional burial. I don’t know,” said Gladue-Beauregard.

He is hoping that GPR scanning will be done at the Winterburn cemetery so his great grandfather’s remains can be located.

“I think for a lot of families who didn't have their loved ones come home, the idea is we’d just like to see some type of acknowledgement and also really try to bring some closure. For myself and for my family, for my family's legacy, we want to have something to go to,” said Gladue-Beauregard.

If Maxime’s remains can be identified, Gladue-Beauregard is uncertain whether attempts will be made to repatriate them to Bigstone Cree Nation.

Gladue-Beauregard says he’s pleased that the scanning work has been undertaken at the Charles Camsell site and is anticipating work will be done at the other two sites connected to the Camsell.

That it took the discovery at Kamloops to get the ball rolling is a “little disheartening,” he said, but added, “These are the little stepping stones. But finally to get to this point, I’m happy that it’s happening now instead of happening in another 100 years from now. But should the government have been listening back then? Absolutely.”