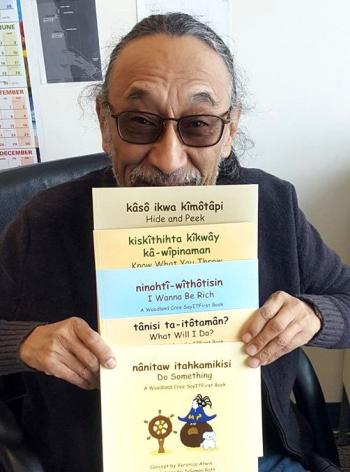 Solomon Ratt with books that he translated into Woods Cree

Five new books published by the First Nations University of Canada will go to help young people to learn the Cree language.

The books are part of an initiative funded by Prince’s Charities Canada and Say It First, an organization dedicated to sharing Indigenous languages.

The books have been translated into both Woods Cree and Plains Cree, and will be given to FNUC education students to teach their own young students during their practicums this term.

“It’s a great project. I’m glad they came to us at the First Nations University,” said Arok Wolvengrey, professor of Alqonquian languages and linguistics.

“I think we made a good fit with the people translating the languages.

“What we do here, and what Say It First is trying to do is help revitalize Indigenous languages. We can’t find a lot of communities around where young people are learning the language, so this is to bring back the language and create opportunities for children to learn,” he said.

After that, Prince’s Charities wanted to fund the project further, so gave money to Say It First to have books also translated into Dene.

It was Prince’s Charities and Say It First who contacted FNUC to see if they wanted to cover the Cree language translations. And they were happy to do it, said Wolvengrey.

“Essentially they gave us the funding to contract translators, and I coordinated translation and helped out with that. Solomon Ratt did the Woods Cree translation. We had a former student, Guy Albert, work on Plains Cree. And Jean Okimâsis worked on the Plains Cree,” said Wolvengrey.

FNUC will hold an information session this Friday with their Faculty of Education students to prep them on how to use the materials with the young learners they’ll encounter. And to teach them how to access the materials in one of the two ways that will be available—through a Say It First YouTube channel with publicly available videos and sound files, or through the use of an app called Aurasma.

To use the app, readers need to have a hard copy of the book, scan the cover, and the app brings up a sound file which accompanies the book, said Wolvengrey.

“Solomon read through and recorded the Woods Cree, and Jean read the Plains Cree. I did the editing of those and got the files together.”
The sound files were merged with the reading of the book “so you can read along and the pages turn, but you can hear it read by a fluent speaker,” said Wolvengrey.

Wolvengrey says they skipped translating into Swampy Cree this time—another Cree dialect, but less widely used—because they had no education students planning to teach in Swampy Cree speaking communities. However, they are in the process of working on that as a future release now.

Ratt, associate professor of Indigenous Languages, Linguistics and Culture at FNUC, enjoyed his part in the translations. Though, he adds, there were a few items he wanted to change, due to their inconsistency with First Nations culture, including words that have never before been spoken in Cree.

“We ran into things like recyclable containers… things like environmentally-friendly products. These are things we don’t have in Cree, so we had to make up terms for those,” he said.

Another example Ratt gives is of the phrase “swinging on a vine in the jungle,” though he found this humorous.

“Swinging on a vine in the jungle… We don’t do that in northern Saskatchewan,” he said, with a laugh. “But we had to make up a new word for that. I just made up a word based on previous knowledge and checked it with the others,” said Ratt, referring to how he had other translators okay his new words before they were published.

In the end, Ratt settled on combining braid and rope together, and using more words to show there was a swinging action involved. And he says he referred to the “jungle” as more of a “big, bushy forest.”

His only other issue was an internal conflict he experienced over the title of the book, “I Wanna to be Rich”, which he says is not a concept that would be spoken about in Cree traditions.

He believes Cree words don’t show this as a value throughout the generations, he said.

But, of course, he is happy to see future generations of children benefit from his work, and keep Aboriginal languages alive.

“We do need a lot more books out there for children to read… And one way to get people to speak their language is to provide material for people to learn. Even adults want access to these books… I’ve noticed the reactions to the (Facebook) posts,” he said.