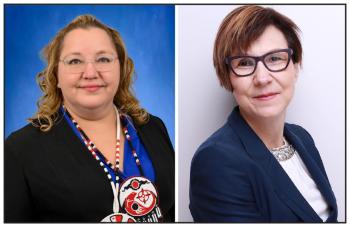 “It was a last-ditch effort from the Caring Society that we feel derailed all of this. I’m not sure why the Caring Society felt they needed to do that. They were part of the process all along. They had input.” —Manitoba Regional Chief Cindy Woodhouse
By Shari Narine
Local Journalism Initiative Reporter
Windspeaker.com

The final agreement for a $40 billion settlement to compensate children and families discriminated against in the delivery of child welfare services on reserve and to bring about systemic changes in that area may be historic, but it’s not good enough.

In a 16-page decision released by the Canadian Human Rights Tribunal (CHRT) Oct. 25, the panel ruled that the final settlement agreement (FSA) is “outstanding in many ways” but falls short in meeting the orders set out by the CHRT previously.

“The Tribunal was open to adding people which is exactly what the FSA does and on this point the Tribunal is very pleased. However, the Tribunal never envisioned disentitling the victims who have already been recognized before the Tribunal through evidence-based findings in previous rulings,” reads the decision.

Children and youth in placements that were not funded by Indigenous Services Canada (ISC), as well as the estates of deceased parents, are not included in the $20 billion compensation portion of the settlement.

Manitoba Regional Chief Cindy Woodhouse, who led the negotiations for the AFN with Canada, says the non-ISC funded placements were excluded because “the parties, we just couldn’t agree if they were covered by the CHRT order. We couldn’t agree on that. It’s negotiations, right?”

As for excluding parental estates, Woodhouse said, “the agreed upon priority was to get compensation to the children.”

However, Cindy Blackstock, executive director of the First Nations Child and Family Caring Society, opposed the settlement for the exclusions that had been made.

“Children who were going to be cut out are now in,” said Blackstock, who lauded the CHRT’s decision not to approve the final settlement agreement.

The AFN and the Caring Society were partners in 2007 when they filed a human rights complaint against the federal government. That action got the ball rolling toward the final settlement agreement.

However, Blackstock did not join the AFN in negotiating the FSA, which was announced in January.

Woodhouse says the final agreement had widespread support, including the National Assembly of Remote Communities (in Ontario) and the Chiefs of Ontario. She also says cross-country trips engaged First Nations communities to explain the final settlement agreement, as well as their ability to opt-out.

However, the CHRT panel noted that “no meaningful steps” were taken by either the AFN or Canada to inform the public, the victims or their families that the final settlement agreement saw a group of people losing entitlement to compensation.

The tribunal also noted that the opt-out time frame had been set at December 2022, which it called too tight and suggested it be moved to March 2023.

However, the AFN had already changed the opt-out deadline to February 2023.

Woodhouse says there were still a lot of moving pieces when the final settlement agreement went to the tribunal and that opt-out deadline was one of them.

The tribunal also called out the AFN for not bringing the “important question” on compensation and the final agreement to the chiefs-in-assembly as a resolution for support. The tribunal noted that, on the contrary, it had received resolutions from some First Nations expressing concerns, although none went so far as to disagree with the agreement.

Woodhouse said the resolution was part of the package that went to the chiefs during this past July assembly. That assembly was way-laid by a number of emergency resolutions dealing with whether National Chief RoseAnne Archibald would remain or be removed from her position. That action meant the majority of assembly resolutions were not dealt with.

However, there was no resolution for the $40 billion compensation agreement on the agenda, as confirmed by the AFN. Instead, the July meeting included a blanketing ceremony for the representative plaintiffs who allowed their names to stand in the court action that ultimately led to the settlement.

“It’s hard to bring all the chiefs together. We only do it twice a year, once in July and once in December. There’s 50-60 resolutions. There are so many priorities for First Nations. We’re working the best we can,” said Woodhouse.

She calls the panel’s decision “disheartening” and says it means compensation that could have been rolled out to 300,000 people early in 2023 will now be delayed.

However, the panel admonished both Canada and the AFN “for providing a false hope” based on the FSA.

“…The panel is not persuaded the expedited compensation would actually occur given the possibility of challenging the Tribunal’s decision on this joint motion by way of a judicial review and the possibility the FSA class action settlement is not approved in the Federal Court,” reads the decision letter.

“I can’t speculate on what would have happened down the road but at the same time, many First Nations were okay with this,” said Woodhouse.

Blackstock doesn’t see the tribunal’s decision as a “doomsday kind of scenario.”

Speaking on CBC, Blackstock said, “It’s actually a good scenario where we're making sure that we're taking care of everyone. And that's consistent with our First Nations values. It's also consistent with human rights standards.”

Woodhouse and ministers Marc Miller (Crown-Indigenous Relations), Patty Hajdu (Indigenous Services Canada) and David Lametti (Justice) all say they are waiting for the full decision by the tribunal, which will be studied by their legal departments before determining how to move forward.

Returning to court is an option. The tribunal’s January 2016 decision was appealed by Canada and dismissed by the federal court in September 2021. However, Canada filed a further appeal with the Federal Court of Appeal on Oct. 29, 2021. That appeal is in abeyance. At the time, Lametti said that when a final agreement was reached it was the government’s intention to drop the appeal.

“We’re still trying to figure out … if we could salvage some of this agreement and if the other parties are willing to try to continue to work on this negotiation. We certainly will always do our best to work for First Nations,” said Woodhouse.

“It’s big money being left on the table,” she added.

Blackstock, however, says the tribunal’s decision does not mean the money has to sit on the table untouched.

“Canada can choose…to release that payment right now and can fill its legal obligations to these victims and to do so as soon as possible,” she said.

That compensation figure sits at $20 billion and includes victims going back to 1991. It also offers more than the $40,000 per person payment to those who have suffered more, but also offers less to other people identified by the tribunal. The tribunal specified that victims were eligible for a minimum of $40,000.

Woodhouse says it is unclear at this point how many more victims qualify through the non-ISC funded placements.

She also says it is unclear as to whether the federal government will up the $20 billion compensation amount.

“We pushed hard and brought it up to this historic level. I myself, I went right to the top. I was tired of negotiations and these things are very hard. Having to go and ask for more money and getting it and being thankful for it,” she said.

Speaking on CBC, Hajdu would not comment on whether her government would go beyond that negotiated $20 billion compensation figure.

“What I can say is that we're willing to stick with it to make sure that children are compensated fairly,” said Hajdu.

Woodhouse says everybody is in it for the “long haul,” noting she will continue to head negotiations for AFN as she holds her position as Manitoba regional chief for at least another two years.

“Of course, the conversations are going to have to happen with the ministers and prime minister,” she said. “We have a really broken system in this country and it needs to be changed.”

The final settlement agreement was the result of six months of negotiations after the AFN, Canada and plaintiffs in two class action cases reached an agreement-in-principle in December 2021. Along with the $20 billion in compensation, there is an additional $19.807 billion for long-term reform of the child and family service program. Negotiations between the parties was a result of the CHRT’s compensation order issued in 2019. The parties decided to negotiate a final settlement agreement instead of directly following the CHRT’s orders.