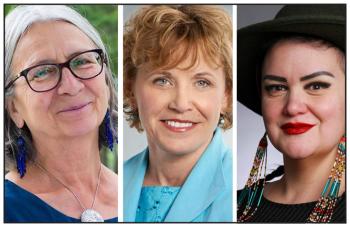 Val Napoleon, interim dean in the faculty of law at the University of Victoria, Jean Teillet, senior counsel with Pape Salter Teillet, and Tamara Pearl, a PhD candidate and assistant professor at the U of A faculty of law

Cindy Gladue is not to be remembered as a victim, says her family, but as a woman with a “joyful, loving spirit.”

Ontario trucker Bradley Barton was convicted in 2021 of manslaughter in her death and sentenced to 12-and-a-half years in prison.

Barton appealed his conviction and sentence. That appeal had been scheduled to be heard in Edmonton earlier this week. However, a power outage in the south tower of the Edmonton Law Courts Jan. 3 forced an indefinite postponement of the hearing.

Barton’s case went through two trials and was appealed to the Supreme Court of Canada, which ordered a new trial.

“As the Supreme Court concluded, ‘the criminal justice system … let her down — indeed, it let us all down,’” read Gladue family friend Julie Kaye on Jan. 5 in a prepared statement from the family.

Kaye’s words opened a teach-in held on the second day of a gathering hosted by the Wahkohtowin Lodge of the University of Alberta and Standing Together, a collective of survivors of gender-based violence, sexual abuse, residential schooling, Sixties Scoop, and relations of missing and murdered Indigenous women, girls, and two-spirit plus persons.

The two-day event was to “hold space” for Cindy Gladue and was meant to coincide with Barton’s hearing.

Through the teach-in, three Indigenous lawyers and law professors provided context to a history of Canadian western law that continues to devalue Indigenous women.

The Canadian western law and the criminal justice system operate in such a manner that it set the stage for how Gladue was treated, said Métis lawyer Jean Teillet, senior counsel with Pape Salter Teillet.

During the first trial, Gladue was demeaned by the words used by Barton’s lawyer and his actions in the court room.

“How can the state do what it did to Cindy and call that justifiable action?” asked Teillet, who argued in front of the Supreme Court.

Val Napoleon, interim dean in the faculty of law at the University of Victoria, said Gladue’s life was informed by the constraints put on her by western law.

Every day, Indigenous women are denied agency, said Napoleon, a member of the Saulteau First Nation in B.C. and an adopted member of the Gitanyow (Gitksan) House of Luuxhon.

She described agency as “personhood…and the fullest possibility of humanity.”  She said that agency meant the capacity of Indigenous women and girls to act and to have will. This agency, she said, was denied to Gladue not only at her death but during her life.

“If we don’t have that complete picture of what’s happening to Indigenous women and girls in this country, then it’s easy to blame us and that’s the problem,” she said.

“The only way we’re going to be able to challenge lawlessness is by rebuilding our (Indigenous) laws,” she said.

Tamara Pearl, a PhD candidate and assistant professor at the U of A faculty of law, said community and family members influenced change and are the activists who “continue to bring these issues to the table (and)…they are essential…to legal reform.”

She pointed to the Truth and Reconciliation Commission (TRC) on the legacy of Indian residential schools and the national inquiry into missing and murdered Indigenous women and girls and gender diverse people as examples of the outcome of this activism.

Pearl, Plains-Cree from One Arrow First Nation, Sask., said it was important that lawyers and legal workers think critically about the power structures in their legal field and how they can work in tandem with Indigenous community activists.

“Holding space for Cindy is to provide a positive, loving, peaceful space out of terrible circumstances to ensure Cindy’s life is not defined by her death and her killer’s legal drama,” said Pearl.

The Wahkohtowin Lodge facility was used to provide a safe space for Gladue family members and close supporters. Gladue’s auntie created 1,200 ribbon skirt pins to be distributed. Supporters were encouraged to wear ribbon skirts, as well as blue or purple shirts, Cindy’s favourite colours. Donations could also be made to a baby basket for Gladue’s newest grandchild.

The Wahkohtowin Law and Governance Lodge was created by the university in response to a call to action from the TRC. The lodge is a dedicated research unit with the objective of upholding Indigenous laws through community-directed research and learning.