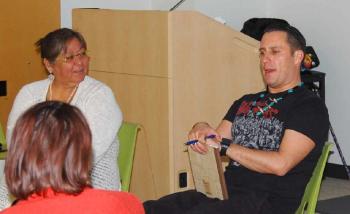 Bill LeBlanc admits sitting in front of adult students and talking to them about storytelling has him nervous.

“This is quite different for me,” said LeBlanc, who is better known as the multi-award winning Métis hip hop artist Rellik.

As Rellik, LeBlanc has shared the stage with the likes of Buffy Sainte-Marie, Run DMC, and Casual. But he confesses facing down adult students has him a little concerned.

Leblanc was approached by David Prodan with E4C to teach an adult literacy course geared toward, but not limited to, Indigenous students.

E4C is a non-profit human services organization in Edmonton that moves people toward positive, healthy and lasting change. Its mission is to alleviate and ultimately eliminate poverty.

Previous courses have been taught by poets and creative writers.

“He thought that it would be a really cool idea to have a hip hop artist/songwriter teach this course,” said LeBlanc.

The first time the class was offered was Feb. 1 and students hung on LeBlanc’s words. The class will run through to May 31.

Rap music, he says, is written mostly in first person.

“There are some phenomenal storytellers in hip hop,” said LeBlanc. “Rap is so descriptive. It’s like a movie being told.”

LeBlanc challenged his students to write about something new, whether it was something they just started doing or someone they just met.

New, he said, would represent want they were all doing in his course. They wrote silently first and then they wrote to music.

“I’m hoping to really add an urban element. I didn’t grow up on reserve. I grew up in a city and a lot of my music and the stuff I’ve written really has an urban element to it, and I definitely want to touch base on a lot of it,” he said.

Over the span of the classes, LeBlanc wants to focus on issues he feels are important within the Indigenous community: poverty, homelessness, domestic violence and substance abuse.

He also wants to look at culture and language loss, colonialism and reconciliation.

“I’d like to bring a lot of those things from my perspective into the program,” he said.

Along with writing time for his students, LeBlanc will also be scheduling Indigenous elements of healing. The course began with an honour and welcoming ceremony.

He wants to have his students write one piece – poems, prose, or songs – during each 90-minute class. Midway through the course, Leblanc plans to record his students’ work in a compilation CD.

“I’m just hoping to give back (to the community). I’m hoping to see other people enjoy it and other people learn something from it from a hip hop and a song-writing stand point,” he said.