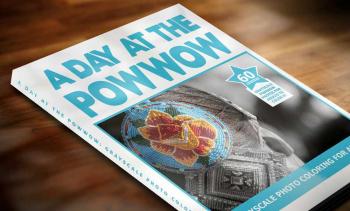 Jason EagleSpeaker has just released a new greyscale photographic coloring book called A Day at the Powwow. It’s set in grayscale to match the needs of a niche hobby-coloring market, and it’s intended to be educational as well as therapeutic for coloring fans.

In the creation of the coloring book he asked himself a few questions:

EagleSpeaker’s book is actually the first in a series. He started with the subject powwows because they are the most easily digestible. Most non-Indigenous people are familiar with them, but they may lack the full understanding of their purpose.

“Rather than coming at someone with residential schools, which might be too heavy all at once…  my hope for A Day at the Powwow is to introduce non-Indigenous people to the Indigenous way of life,” said Eagle Speaker.

His hope is that by piquing the interest of those who like to color, it will also motivate them to conduct some of their own research to learn more.

“What better way to introduce it to people than to have a coloring image in front of them. Maybe they can spend some time researching, and look up some real colors. Maybe they can ask ‘What is this dance? What is the bead work? And what is a jingle?” said EagleSpeaker.

“I find, more often than not, non-Indigenous people that I meet have not attended a powwow. Even though they’re everywhere now,” he said.

EagleSpeaker started putting the book together during the past summer, while all of these events were occurring, and his family gave him a helping hand. Even his six-year-old son was involved.

“We try to keep our projects very family-oriented… created by family, delivered by family… the parts of the imagery my son produced were the couple of photos where his outfits are laying on the table. That’s to give people different textures,” said EagleSpeaker

According to EagleSpeaker, grayscale coloring fans like when there is depth in pictures and lots of detail and variation in imagery.

It’s an “advanced” coloring market, and they appreciate complexity. EagleSpeaker’s son is involved in traditional dancing, so his outfits are beautiful, handcrafted and meticulously beaded pieces of work—the perfect material for those who also want to color it meticulously.

In fact, any beadwork looks good in grayscale, says Eagle Speaker, which is why he chose the cover photo he did.

“There’s a picture of a beaded barrette and the background is blurred. It really stands out. I think beadwork in itself, and seeing a beaded barrette, really symbolizes the strength of powwow and the uniqueness of powwow. There’s not a lot of places you can go and see a fully-beaded barrette,” he said.

EagleSpeaker also has a personal fondness for powwows. He credits his grandfather with paving the way to powwow traditions for him, because he placed him in a Calgary Stampede powwow dance youth group which gave EagleSpeaker the opportunity to travel the globe. He now makes sure his family attends them every year.

Next on the agenda for EagleSpeaker’s series is A Day at the Powwow Volume Two. The book will also feature long and short explanations of what happens at a powwow, in case readers were curious after seeing the first edition.

After that, EagleSpeaker might move into books about tipis, moccasins, or Elders—or maybe all three, he says.

“Hopefully it opens up people’s minds a little bit so that I can lay the heavy stuff on them… If you’re looking from the point of view of a person who’s never been to a powwow, and maybe only seen the Hollywood Indian on TV, books like this are really a revelation,” he said.

Books can be ordered from Amazon, or purchased from local bookstores. To purchase directly from EagleSpeaker go to this website: http://www.eaglespeaker.com/home/