Grandmothers battle chief and council and Algonquins of Ontario over development 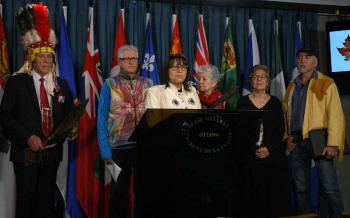 Today, April 6, in a press conference on Parliament Hill, the traditional Grandmothers of Pikwakanagan asserted their traditional stewardship and title to Algonquin lands, and restated their disapproval of a proposed industrial development to Chaudière Falls, as well as Albert and Victoria Islands in the Ottawa/Gatineau core.

The group’s lawyer is Elders Without Borders’ Michael Swinwood. The present claim has been amended to name the Kokomisag Tiji Pikwakanagan (Traditional Grandmothers of Pikwakanagan) as chief plaintiffs.

“We’re confident,” Swinwood remarked, “that this action will prevail.”

“There are many times, as women,” said Grandmother Jane Chartrand, named as chief plaintiff in the claim, “that women’s counsel has been left unheard, and it was at this time, when we saw what was happening with the Algonquin land claim, that we said, no. We will not allow this.

“It is time for our voice to be heard because we are the women. The women always had a council in traditional government, and we have to exercise our right to the land. Not just for us, but for the next generation of our children, and our children’s children.”

Chartrand suggests the claim is not factionalism, or a coup against the band.

Kokomisag spokesperson Greg Sarazin stated that the Pikwakanagan general population expressed concerns over the land claim negotiations. The community voted marginally against the land claim in a formal referendum, while Algonquins of Ontario’s other constituencies voted overwhelmingly in favor.

In a statement to Windspeaker.com, Pikwakanagan Chief Kirby Whiteduck said: “While the action has been filed in court, none of council has been served. It’s not really an action until it happens.”

The chief and council refused other comment. The Algonquins of Ontario did not return inquiries for a statement.

The Kokomisag resist these proposed developments, citing the historical, cultural and spiritual importance of the sites for Anishinaabeg and others.

“Our sacred site, Chaudière, where we always did ceremony, is under attack by what is called progress,” said Chartrand. “We don’t see this as progress. We see this as a taking away once again of something that we hold sacred. It is where we go to do ceremony, where our men had a vision to make this into a place for all of us to go and be in peace; not just Indigenous, but all people.”

Cardinal echoed the sentiment: “They are our sacred islands. This is our sacred circle. For thousands of years Ottawa was always the centre of our Anishinaabeg people. That’s why the immigrants chose this as their capital. It was always the capital. It is a spiritual place of the joining of the four rivers. It is a sacred place where the islands are shaped like a sacred pipe.”

Windmill says it does not “have a legal obligation to consult with First Nations when it comes to privately-held lands,” but has done so in this case, in recognition of the site’s special significance for First Nations.

Swinwood contests the fairness of Windmill’s negotiations with the Algonquins.

His argument rests on legal precedent, set in Canada’s Supreme Court decision in 2014 Tsilhqot’in Nation v. British Columbia for determining Indigenous title to lands. His case contends further that Indigenous law must be considered along with Canadian common law.

The issue boils down to whether the Kokomisag can be considered traditional stewards under customary Anishinaabeg law. Further, they will soon find out whether the courts recognize this title against the authority of elected chief and council.