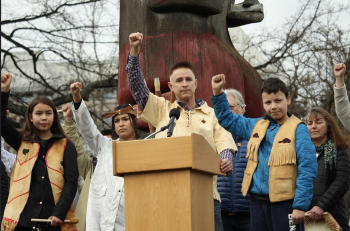 It was back in 2011 that Paul Lacerte, a member of the Nadleh Whut’en First Nation in British Columbia, started the Moose Hide Campaign with his teenage daughter Raven.

The father-daughter duo launched the non-profit organization in an effort to raise awareness and hopefully decrease violence against Indigenous women and children.

Officials with the campaign distribute square moose hide pins to be worn by those who want to demonstrate their commitment to ending violence towards all women and children.

Since the campaign launched more than a decade ago, about three million pins have been distributed nationally.

A goal is to have 10 million pins sent out within the next few years.

Thursday (May 12) is the organization’s main annual event to engage Canadians and invite them to participate in both a reconciliation journey and a chance to decrease violence in their communities.

The Moose Hide Campaign started off as a small gathering of supporters. About 350,000 people were expected to take part in events held across Canada today. That’s a significant increase from the 80,000 Canadians that took part in the campaign’s main 2021 event.

Sage Lacerte, Raven’s sister, is the national ambassador of the Moose Hide Campaign. She has taken on additional publicity engagements during Raven’s maternity leave. Sage explained the dramatic rise in the number of participants at events today.

That allowed campaign officials to dramatically increase the number of individuals they could reach.

A large number of schools, both those at the K-12 and post-secondary levels, joined the campaign. There’s also been a huge increase in participation from Indigenous communities, as well as Indigenous and non-Indigenous companies.

For many, taking part can be as simple as taking a pledge in the comfort of their own homes.

Individuals are asked to recite the following sentence: “I pledge to take a stand against violence towards women and children.”

While many cities will have in-person events this year, the remote ones are also being continued.

“We had to adjust and be able to adapt,” Sage said, adding virtual events will continue to play key roles in future years of the campaign.

Paul and Sage will attend a Victoria event today. They are expected to be joined by Canada’s Governor General Mary Simon, who is Inuk, and Murray Sinclair, the former chair of the Truth and Reconciliation Commission.

“He’s been a long-time supporter of our campaign,” Sage said. “But this will be the first time he will be in attendance at one of our events.”

Paul is thrilled with how fast the Moose Hide Campaign has been growing recently.

Lacerte also believes it won’t be that much longer before the campaign is able to reach one of its goals.

“We’re on a pretty steep trajectory,” he said. “It took us seven years to get to 1 million pins. And then three more years to get to 3 million. At this current pace we’ll be at 10 million by 2025.”

A 2020 Reciprocal Consulting report indicated that for every Moose Hide Campaign pin that was distributed, five conversations started because of that one pin.