Governments, police continue to make the same mistakes that led to Ipperwash confrontation 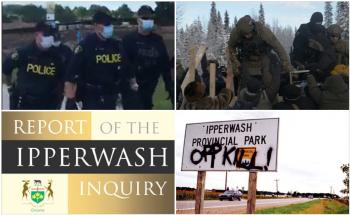 Twenty-five years after one man was killed and another seriously injured by police action when members of the Stoney Point Nation and supporters occupied Ipperwash Provincial Park, First Nations across the country continue to assert their treaty and inherent rights.

Hare, former chief of M’Chigeeng First Nation, arrived at Ipperwash Park on the night of Sept. 6, 1995 shortly after Anthony “Dudley” George had been shot and killed by Ontario Provincial Police. Cecil Bernard George had been brutally assaulted, near fatally, and arrested by the OPP that night, too.

The First Nation members had occupied the park to urge Canada to return the lands, which had been expropriated during the Second World War under the War Measures Act. Ottawa had promised to return the land to the Stoney Point band after the war ended, but instead continued to use and control the territory for military purposes.

In 2003, in response to the government's and police response at Ipperwash, Ontario established the Ipperwash Inquiry tasked with reporting on the events surrounding Dudley George’s death and to make recommendations on how to avoid police violence in similar circumstances in future.  Those recommendations were made public four years later. See the Ipperwash Inquiry report here.

Despite the recommendations, Hare says issues remain around revenue sharing, control and development of the area’s natural resources, land stewardship, and duty to consult and accommodate.

“When they make bills, these policies and what not, why can’t an Aboriginal or Indigenous person be at the table? That’s the part that’s missing here. They say we’re three governments. Where are we? There’s only two governments. We’re not at the tables,” Hare said, adding that chiefs are asked for input after the bills have been passed.

It’s only during election years, he says, that the provincial and federal governments seek meaningful input from chiefs.

One objective of the Ipperwash Inquiry was to identify potential triggers for the escalation of protests in order to stave off confrontations.

However, in early August, a group of land defenders from the Six Nations of the Grand River came face-to face with the Ontario Provincial Police. The Land Defenders of 1492 Land Back Lane had stopped a housing development project bordering the town of Caledonia and the Six Nations reserve.

At issue is a tract of land that runs about a mile on each side of the Grand River to Lake Erie, of which more than 90 per cent has been removed from the First Nation through improper, illegal sales.

The OPP, on delivering an injunction order to the Land Back Lane site, arrested a handful of land defenders. This isn’t the only instance that police have confronted Indigenous rights land occupiers in the past 12 months.

Wet’suwet’en members set up the Unist’ot’en camps in January 2019 in opposition to the development of the Coastal GasLink natural gas pipeline through unceded traditional Indigenous territory in British Columbia. That action led to arrests by the RCMP and subsequent disturbing reports that the police were prepared to shoot and violently remove Wet’suwet’en from the camps.

In the midst of this protest, BC Premier John Horgan announced Bill 41. The legislation was adopted unanimously to implement the United Nations Declaration on the Rights of Indigenous Peoples. Bill 41 calls for the government to consult with Indigenous peoples to ensure the province’s laws are in line with UNDRIP and to prepare an implementation and action plan, as well as to either make joint decisions or for the Indigenous governing body to make the decision on project approvals.

However, Horgan said the legislation, which became law in November 2019 was “forward looking …. not retrospective” and would not be enacted for the Coastal GasLink natural gas pipeline.

On Feb. 6 at least six demonstrators were arrested at the Wet’suwet’en checkpoint camp. In a statement, the RCMP said a “minimal amount of force” was used to make the arrests. However, eyewitnesses contested that statement.

In Alberta, the United Conservative Party government passed Bill 1, the Critical Infrastructure Defence Act, which came into force in June. The bill, which was initiated during the nation-wide protests supporting Wet’suwet’en, protects “essential infrastructure,” defined in part as pipelines, refinery sites, highways, and railways, from being “wilfully” destroyed, damaged, obstructed or interrupted.

Bill 1, said Treaty 8 in a letter to Alberta’s Minister of Justice, “was created and enacted in complete disregard and ignorance to the Crown’s Treaty relationship and obligations with our Sovereign Nations.”

“At the end of the day it’s us who are hit by these bills not them,” said Hare.