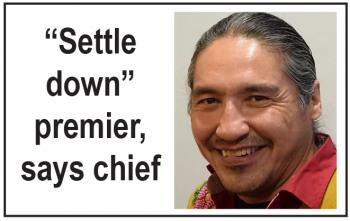 “Albertans will not tolerate this kind of lawless mockery of our democratic principles and this attack on our nation’s and our province’s prosperity.” —Alberta Premier Jason Kenney
By Shari Narine
Windspeaker.com Contributor

The first and only bill introduced by the United Conservative government as the Alberta Legislature began its spring sitting on Feb. 25 is aimed at stopping any more such actions as the Wet’suwet’en solidarity demonstrations that shut down rail lines and roadways.

Bill 1, the Critical Infrastructure Defence Act, comes only five days after a group calling themselves Cuzzins for Wet’suwet’en blockaded CN tracks in west Edmonton. If the bill becomes law those taking part in similar protests will each face minimum fines of $10,000 for the first day of action and then $25,000 for each subsequent day. They also face the possibility of six months jail time.

Corporations that aid, counsel, or direct the commission of an offence are also open to fines of up to $200,000. The officer, director or agent of the corporation who directed or authorized the action would also be liable to a penalty.

“We trust our professional police services to, once the legislature has passed this law, to use this as an additional tool to maintain public safety, to maintain respect for the rule of law, to protect critical public infrastructure, and to protect jobs and the economy here in Alberta,” said Premier Jason Kenney.

In today’s Speech from the Throne, it states “in Alberta, police do not have to wait for a warrant to act in the face of illegal activity and uphold the rule of law.”

On Feb. 24, the RCMP dismantled a two-and-a-half-week-long camp set up beside the rail line at Tyendinaga, Ont. that had effectively halted cargo and passenger trains. It was set up by Mohawk people in support of the Wet’suwet’en hereditary chiefs who oppose the route of the Coastal Gas Link pipeline through their territory.

Kenney referred to the rail disruption, and other demonstrations that shut down roadways in Winnipeg and British Columbia, and disrupted the B.C Legislature and offices of Members of Parliament, as “virtual anarchy.”

“Albertans will not tolerate this kind of lawless mockery of our democratic principles and this attack on our nation’s and our province’s prosperity,” said Kenney.

“We here in Alberta are taking decisive action to respond to this (which)… will end the lawlessness blockades in our province which jeopardize public safety,” said Justice Minister and Solicitor General Doug Schweitzer.

“We want to send that clear signal: Not in Alberta. Not now. Not ever,” he said.

The focus of the legislation is on pipelines, oil and gas production, refinery sites, highways, railways, dams, bridges, electric, gas and water facilities and telecommunication lines.

How that will play out if there are any more truck convoys slowing down traffic like the pro-oilsands support group did last year along the Anthony Henday Drive in Edmonton is unclear. While Schweitzer emphasized roadways are part of Bill 1, he noted, police will be able to “use their discretion as they see fit.”

Although this bill has been developed in a short period of time, Schweitzer said previous consultation with law enforcement agencies carried out on the trespassing on private property bill that the government introduced last session helped form the basis for this bill.

Kenney stressed that blockades were already illegal activities – and court injunctions to stop them weren’t necessary – but clearly the existing penalties and court actions were not having the desired impact.

“We are using the powers that we do have to create summary offences of this nature with penalties with administrative fines, with potential jail time, to say we’re giving police, prosecutors additional tools to crack down on illegal blockages of critical infrastructure and we’re adding to the disincentive of that kind of lawlessness with the power that we have under Alberta legislation,” said Kenney.

“I think Premier Kenney should settle down,” said Adam.

“Looking at all the issues and concerns that First Nations people have regardless of where they’re living, major cities or reserves, they’re all living the same conditions. Nothing has improved so you’re going to probably see more demonstrations in that regards.”

Siksika First Nation Councillor Reuben (Buck) Breaker also took exception to Bill 1. In a tweet Breaker warned Kenney to “be careful on this Mr Kenney. No consultation? Southern Alberta Nations will not back down. There is a reason we are called Lords of the Plains. Want to find out? Try build a pipeline through our land.”

Adam said he doesn’t understand Kenney’s intentions although he’s not surprised by the premier.

“You’ve got to remember that Jason Kenney was part of the Harper government in Ottawa which was pretty much run like a police state, so if he’s following the same footsteps in that regard, so I guess we’re going to have a police-state province,” said Adam.